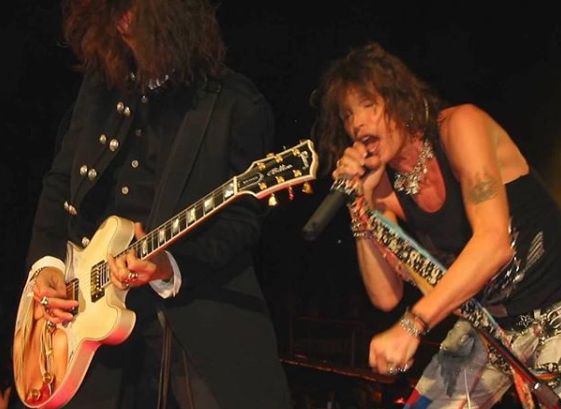 Steven Tyler wrote the Sweet Emotion because of his frustration with the band. The group was doing a lot of drugs at the time, and tensions were rising, especially between Tyler and guitarist Joe Perry.  Sweet Emotion is also a statement of doing things on your own and not letting people bring you down.

“Talk about things that nobody cares, wearing out things, things that nobody wears,” – the first line in which a reference to Joe Perry’s girlfriend Elissa because of the many disagreements between the two. Of course, these tensions rise because of their drug use, and in particular one night when Tyler came to Perry’s hotel room looking for drugs, and he and Elissa sent him away denying him to share their drugs.

Perry was known as “Mr. Sweet Emotion,” and Steven Tyler based the song on him while the music was based on the bass line Tom Hamilton came up with and during a jam session, they managed to put it all together piece by piece.

A hidden message was buried also buried in the track — the group did some clapping and chanting and can be heard by playing it backward, which also creates a sucking noise in the song. What they chanting about was about their manager, Frank Connelly, who had been diagnosed with cancer and sold rights to manage the band to the team of Steve Leber and David Krebs.

But Jack Douglas debunked it and said it was “Thank you, Frank” that Tyler was chanting.

According to Rolling Stone’s Top 500 Singles:

“As the sessions for Toys in the Attic reached the eleventh hour at the Record Plant in New York, producer Douglas called out for ideas. Bassist Hamilton resurrected a riff that had been germinating for several years, and it was outfitted with bass marimba and Joe Perry’s voice-box recitation of the song title. A few months later, Aerosmith had their first Top 40 single.”