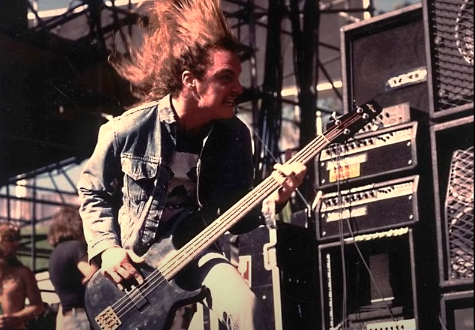 In the midst of the hippie movement, in 1962, one of the best bass players in the world of Heavy Metal was born in San Francisco, California: Clifford Lee Burton.

Raised by his parents, Jan and Ray Burton who were immersed in the love and peace movement, he adopts the hippie ideals, image, and attitude. He had two other older siblings, David Scott and Connie. His parents describe his childhood as a quiet, intelligent child who preferred listening to music and reading to going out to play outside his house. At the age of 6, he begins to take piano lessons.

In his adolescence, the family tragedy knocks on his door, when his older brother David Scott dies of a brain aneurysm, this would leave him with a deep emotional mark and would change his life forever. He decides to give up the piano and begins to learn to play the electric bass. For this, he sets himself a goal and tells the people close to him: “I am going to be the best bass player for my brother.”

It was in November 1982 at a performance with Trauma at a pub called Whiskey a Go-Go where James Hetfield and Lars Ulrich were present when they heard a solo that Cliff was playing, but were shocked when they realized that this was just executed by bass and not a guitar as it was heard and they liked the aggressive way he played his instrument.

With the departure of Ron McGovney from the group, Metallica was looking for a bassist and Cliff was the perfect member to join them. But joining the band was not easy, since Burton did not want to move to Los Angeles where Metallica was based, so after a series of phone calls and some rehearsals, all the members moved to San Francisco, a boom in the Bay Area. Cliff Burton’s debut with Metallica was in March 1983.

In July 1983, Metallica released their first studio album: Kill ‘Em All where most of the songs had already been written when Burton joined the band. His participation is given in the creation of the bass tracks and his greatest credit as an author is in the track: (Anesthesia) Pulling Teeth where his original style of playing is heard, using great distortion, the Wah Wah pedal, and tapping.

In 1984, Metallica released their second studio album: Ride the Lightning where Cliff stands out with his great influence on the album. The songs ‘The Call of Ktulu’ and the jewel of ‘For Whom the Bell Tolls’ are the highlights of his performance. In the credits of the tracks, he appeared in 6 of the 8 songs.

Two years later, the first commercial success would come with their ‘Master of Puppets’ album, with which they also managed to win over critics, qualifying the album as one of the best thrash metal albums. The most important contribution to Burton’s album was on the track Orion, a song that was composed almost entirely by Cliff where he performs his characteristic solos. However, for Cliff Burton, the song that gives the album its name is the song that he liked to perform the most of all the songs on the album.

Clifford Lee Burton. One of the best bassists music has ever had. His abilities have been considered by many as magical and impressive, adding that his compositions have been called legendary.

35 years ago, Metallica was in Sweden, on their promotional tour of the masterpiece ‘Master Of Puppets.’ They had just finished their concert in the city of Solnahallen and were heading towards their next destination.

There was a tragic accident on the Kronoberg road, 1 deceased. Cliff Burton had the gift of life taken from him.

On September 27, 1986, Metallica lost much of its essence. The band was devastated and since then this loss has been something that continues to affect them. The music is in mourning before this terrible event, but they have not left their loss in vain.

To this day many bassists start their journey on this instrument, inspired by its icon Cliff. He revolutionized the sound of metal and turned everyone upside down with his way of playing, as it is very peculiar and unique. His solos and improvising majestic compositions are an example of this.

He always wanted to learn more and more about music, literature, and other arts in order to innovate and implement them in his style. He was studying music theory and this led him to do a lot of harmonies and melodic riffs for the band.

He was very creative within the studio. What do I mean by this? In the intro of ‘For Whom The Bell Tolls’ you can hear the famous bass line accompanying the guitars. But few know that in reality, it is not only one bassline but 3, one playing the same as the guitars, another with harmonics, and another with the famous bassline.

The same happens with the beginning of Damage Inc. This has been a musical conundrum since only Cliff knows how many tracks he used to record this mysterious introduction, although there are an estimated 12 in total. To this day no one knows.

He was a very open person with musical genres and was a fan of classical music, which he reflected in the introduction of ‘Fight Fire With Fire,’ which is a kind of interpretation of the Minuette en G (song from the 17th century).