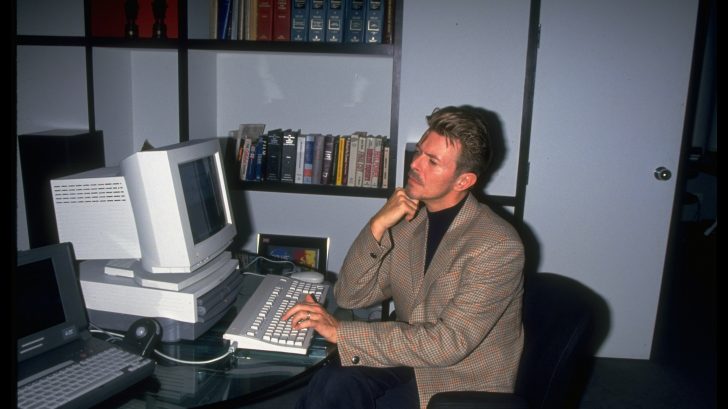 The safest prediction in regards to David Bowie’s career was to expect the unexpected. He was a real innovator. That important characteristic spanned beyond music. Bowie wasn’t just an iconic rock musician, he also became a person of interest in the financial world.The British rock star was the first artist to marry his music with Wall Street.

David Bowie has been familiar with financial matters since he climbed up the charts in the late 1960s.The glam rock god had emerged as a powerful force in music with hits like “Space Oddity” in 1969 and “Starman” in 1972. Despite shooting to fame rather quickly, bad business deals had left the star near bankruptcy in the 1970s. Those deals involved losing rights of his music to a former manager. The singer had signed a bad contract handing over half of all his earnings to Tony Defries for 7 years- lasting until 1975

Bowie parted with Defries once the contract ended. He learned from the former manager and proudly  took over command of his own career. The next business moves Bowie would make would reflect the innovative and visionary style of his music. In 1983, Bowie’s contract with record label RCA expired and he signed over to EMI for $17.5 million dollars. After EMI he signed short-term agreements with Victory Music, BMG, then Virgin Records- which allowed him to still have ownership of his own recordings.

“He wanted to control where and when his music was used — his pride in that was important. It was never about money. It was always about doing the newest thing, doing the coolest thing,” stated Bill Zysblat (Bowie’s business manager) to Billboard.

Bowie continued to prove to the music world that his financial judgement was sharp and advanced. In 1996 hehe had explored the world wide web as one of the first artitsts to release a song online, “Telling Lies.”

With his financial manager Billy Zysblat and banker David Pullman, Bowie created a plan to capitalize on his 25 year old catalogue of music. The venture was known as ‘Bowie Bonds’ and these asset-backed securities would begin to generate millions of dollars. Those who invested in the bonds would share the interest of David Bowie’s royalties for the next 10 years, with a fixed yearly return of 7.9%. The U.S. insurance company, Prudential Financial bought the securities for $55 million dollars in $1,000 dollar bonds.

“Bowie was savvy from the beginning — his first recording deal recaptured his masters. When he signed his recording deal, he took less up front and negotiated to get his masters back. What young artist was doing that back then? He was betting that his albums were assets that would be worth more later,” stated Pullman to Billboard.

This was the first time a music artist sold intellectual property via bonds. The deal with Prudential allowed Bowie to buy back his shares from his former manager, Tony Defries, that he had lost to RCA in the 1970s. Pullman then made similar deals with James Brown, Ashford & Simpson, and Marvin Gaye.

Among al the characters David Bowie portrayed throughout his career, a hero for musician’s rights could be ranked among his most important.