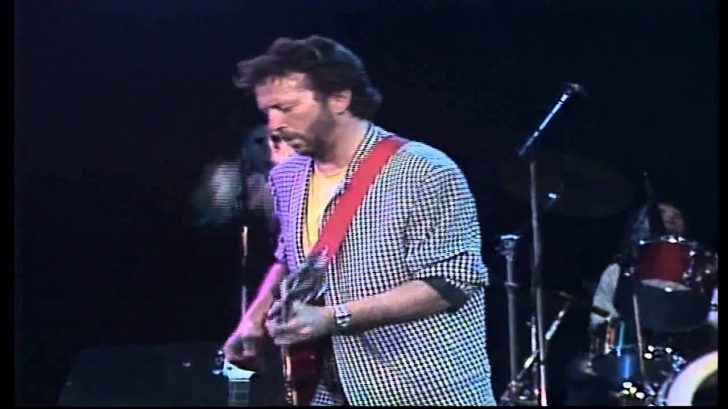 When requesting George Harrison, a longstanding friend, and colleague, to accompany him on his 1991 Japanese tour, Eric Clapton had to be extremely persuasive.

George wasn’t a huge lover of traveling. He was repeatedly hauled across the globe as a Beatle during the heyday of Beatlemania. George’s nerves were damaged by traveling. He frequently felt anxious, apprehensive, and dangerous both physically and psychologically. Fortunately, the group decided to call it quits in 1966.

But in 1974, George courageously started his first and sole solo American tour. That wasn’t any good. George hence had a poor performance history. Clapton had to make a compelling case.

How George Harrison was persuaded to accompany Eric Clapton on his 1991 tour.

George didn’t enjoy it, but he did regret not going on tour. He revealed to the Chicago Tribune in 1992, “The only regret I have about not touring more is that it’s fun playing with a band, that’s all.”

When Clapton invited George to accompany him on his 1991 Japan tour, remorse was on his aspect.

George explained how he got on Clapton’s tour by saying, “He’d been everywhere-Latin America, Australia, the Far East-a year or two ago, and he’d say to me that people would always ask him: ‘Where’s George? What’s going on? Why isn’t he doing anything?’

“Then in London during the making of Clapton’s ’24 Nights’ album at the Royal Albert Hall, I saw him quite a bit and he said, ‘Look, we’re not doing anything after this, and if you’d like, you could use my band and I’d come with you, and it’d be simple for you.’”

Clapton and George put on 12 gigs, which benefitted both of them.
George’s decision to travel with Clapton had yet another justification. It enabled him to give up smoking. However, Clapton greatly benefited from their trip to Japan as well. Conor, his four-year-old son, had lately died from a window accident. He took an entire year off, but he still required something fresh to distract him from the disaster.

“I really needed an excuse to stop smoking, actually,” George revealed to a reporter while on the tour. “I had to get myself out of a rut, and I was just smoking, been smoking all my life… Eric suggested it because he wasn’t working this year, and I think he liked the idea of doing something because he committed himself to a year off, and I think, especially after the accident that happened earlier in the year, that he really wanted to work. Get his mind into some work.

“I needed something just to get myself out of a rut. I thought, ‘Well, this is a good chance to experience what it’s like, I can see by going to Japan whether I want to do any more touring or not, it’s like a way for me to put my toe in the water and test how it is for myself, for my own stamina.

“That’s what I was worried about… I feel quite good, I can get up there and sing and can breathe.”

The entire experience, according to George, was “quite nice, just long enough to get the feel of it, not too long to dislike it. I had a good time.”

The first few performances, he said to the Chicago Tribune, had fulfilled his ego. George, though, wasn’t prepared to go back on the road right away. The most important lesson from the 1991 tour was that Clapton persuaded George to go, and it was significant for the pair.