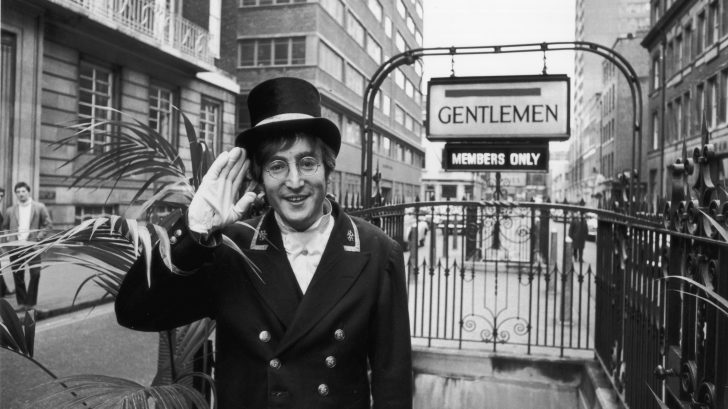 27th November 1966: British rock musician and member of The Beatles John Lennon (1940 - 1980), dressed as a Public Lavatory Commissionaire during the filming of the 'Not Only...But Also' Christmas Special, starring Peter Cook and Dudley Moore. He is outside a public convenience near Berwick Street, in London's Soho. (Photo by Ron Case/Keystone/Getty Images)

John Lennon has written numerous musical masterpieces but his genius came through with “Imagine.” It wasn’t just his best-selling single as a solo artist, the track ultimately became an anthem for peace. It’s iconic in the truest sense of the word. It’s been covered by several artists in every genre and style imaginable. It’s been performed in various events around the world.

The impact of his music on rock ‘n roll and music in general cannot be stated enough. “Imagine” had no fluff, no drama but it got to everyone who listened to it. There was nothing revolutionary, innovative or unique but the song required you to feel something – sadness, anguish, despair, hope.

In Imagine, John Lennon yearned for a world without boundaries. From a realist’s point-of-view, it borders on the irrational. But with the melody and John’s mesmerizing voice, it’s hard not to feel some sort of longing for the same thing. To live at a time where social standing, religion or politics no longer divides people is impossible and yet, for the whole duration of the song, it makes you hopeful that maybe, just maybe, it can happen.

Over four decades after its release, it remains to challenge the status quo.

Last 2015 after the Paris attacks, pianist Davide Martello drove 400 miles through the night to play “Imagine” on a grand piano outside the Bataclan theatre. In an interview, he said:

“I wanted to be there to try and comfort, and offer a sign of hope. I can’t bring people back but I can inspire them with music and when people are inspired they can do anything. That’s why I played Imagine.”

Imagine lifts up your spirit in challenging moments and yet, there are several people who believe that the ideas it presents are dangerous in more ways than one. As nothing more than a song, it’s completely harmless. But taking out the message and acting on it, that’s an entirely different story.

Creating Imagine only took a few minutes and yet as time passes, more and more are clinging on to it as a way of looking for something that makes living so much better. Then again, it goes against establishments, the government and basically anything that separates humans from each other.

The lyrics have always been controversial. And there were artists who tried tweaking it during their live performances. And not surprisingly, they got slammed for it.

Imagine‘s lasting influence is undeniable but it was hard to listen to it and not think of the man behind the classic. Early on, people accused him of communism. And over time, some critics have taken issue with the fact that while John Lennon was singing about “no possessions,” he had a custom-painted Rolls Royce and other things that go against what he’s singing about. It didn’t help when he said,

“Put your political message across with a little honey.”

Another reason why it sounded hypocritical is because Lennon later on revealed that Yoko Ono was equally responsible for the creation of Imagine and yet it was only in 2017 when she was formally recognized as its co-writer. Lennon himself admitted his chauvinistic side won over at the time.

“A lot of it – the lyric and the concept – came from Yoko, but in those days I was a bit more selfish, a bit more macho, and I sort of omitted her contribution.” – John Lennon

More Than Another Classic Rock Song

If there are those who found it unbelievable that Imagine would become a global anthem, it would be Lennon and Ono.

“We both liked the song a lot but we honestly didn’t realise it would turn into the powerful song it has, all over the world… We just did it because we believed in the words and it just reflected how we were feeling.” – Yoko Ono

It’s one of John Lennon’s most covered songs and A-listers in the music industry have made their own take on this track – Diana Ross, Madonna, Ray Charles, Neil Young, Elton John, Queen, David Bowie, Peter Gabriel, Joan Baez, and Dolly Parton to name a few. As of this writing, over 200 artists have covered Imagine and it has been used not just in rallies and concerts but even in major sports events.

“As you know, in many countries around the world — my wife and I have visited about 125 countries — you hear John Lennon’s song ‘Imagine’ used almost equally with national anthems. So John Lennon has had a major impact on some of the countries that are developing in the world.”

Impressively, the secret behind this enduring song is how it remains relevant even after all these years. It might have a simple melody but everything else about it is complex and multi-faceted. There’s no way of looking at it just from one angle. It can be interpreted in many ways and everyone has their own thought about it.

Bono: “I don’t like how the song has become this New Age anthem… It is a rigorous idea — that you have to hold a thought, and then go after it. My respect for John is that he didn’t just have the thought. He went after it.”

Don Henley: “hearing ‘Imagine’ now is a bittersweet experience. On one hand, it’s a calming influence. On the other, it’s connected to the violence.”

RATM’s Tom Morello: “If people really believed the sentiments John Lennon expressed in that song, we would have had revolution in this country a long time ago.”

Joan Baez: “It has tremendous meaning in places that are in the throes of social change.”

At the end of the day, Imagine still and will always be a song that transcends time and generation. It may not be perfect and it may have its flaws but all things considered, John Lennon did the world a favor by writing and performing it.