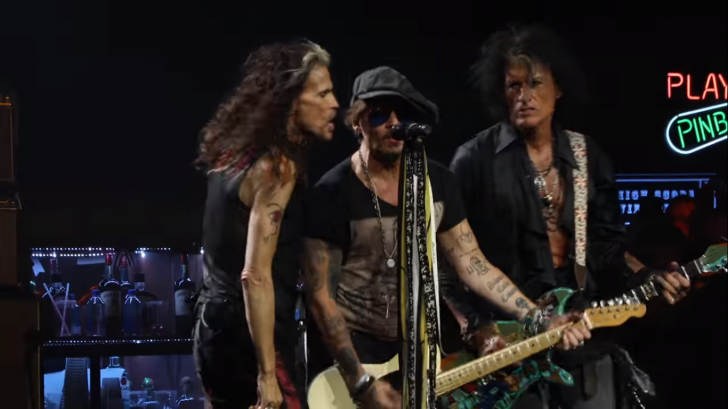 Thanks to an idea by today’s famous producer Rick Rubin -then a young man of 22 years-, Aerosmith and Run DMC billed an impressive hit that in the mid-80s rotated intensely on MTV.

“What is rap?” Tim Collins asked Rick Rubin after hearing the offer. Aerosmith’s manager sniffed out the possibility of a good deal, but first, he had to clear up an elementary doubt. It was 1986 and he had received a surprise phone call from a hip-hop producer who, at just 22 years old, had already founded a label (Def Jam) and spoke to him with the ease and security of a much more experienced man. The idea was risky: to record a “rare” version of a hit by Steven Tyler’s band, which was precisely in need of some new strategy to overcome a little the pronounced drop caused by the low sales of their records from that decade -Rock in a Hard Place (1982) and Done with Mirrors (1985)- and the problems derived from the uncontrolled consumption of cocaine by some of its members. Rare enough for Collins to formulate that candid question with the secret hope that the answer would allow him to glimpse a springboard to reach the fabulous display case that in those years had enhanced the careers of stars like Madonna and Michael Jackson: the MTV channel, a key piece for the dissemination of video clips that the industry now considered essential.

Aerosmith had hit the ground running in the 70s, but their sound -a melodramatic hard rock recharged with simple and catchy riffs, very common in glam- didn’t quite work in the 80s: bands like Metallica or Iron Maiden captured the interest of fans. From heavy rock, genres such as thrash and speed metal began to grow, and the Boston quintet couldn’t adjust to this new context.

Partnership with a group of rap musicians was a risky test but also had the benefit of novelty. “Walk This Way” had been the last single to reach the Billboard Top Ten, back in 1975. And Jam Master Jay, founder, and DJ of Run DMC, the jewel of New York hip-hop at the time, used it as input for his sessions: instead of the typical recycling of funk or disco themes, he appealed to mix his solid bases with rock riffs. Although he wasn’t exactly sure where they came from: he once confessed that he thought that Toys in the Attic, the title of the album that included “Walk This Way”, was the name of the band to which the song belonged.

“Walk This Way” renewed the spirit of Aerosmith and legitimized rap among white audiences with a momentum similar to that which had been caused by Eddie Van Halen’s solo on Michael Jackson’s “Beat It”, a historic bridge between hard rock and black pop. Suddenly Run DMC was going platinum (Raising Hell) and making the cover of Rolling Stone magazine. They had already been the only rappers included in the Live Aid poster the previous year, but with the noise of this hit, the scene of the future seemed to change completely, although in the end, the Beastie Boys were the band that made the most revenue from the popular interest in the results. of that adventure. Aerosmith, for its part, managed to attract the attention of the young people who followed bands like Bon Jovi, Mötley Crüe, and Guns N’ Roses en masse: their next album, Permanent Vacation (1987), sold five million copies (ten times more than its predecessor) and established them definitively as a stadium band.

Then came the collaborations of Public Enemy with Anthrax and a much less happy one between Limp Bizkit and Linkin Park, landmarks of a route that was enabled for new routes. The door was opened by this song that – try listening to it today – retains its magic and its power, virtuous results of the temperance of an intelligent and daring producer who, above all, had confidence, an essential ingredient to cook up a success.