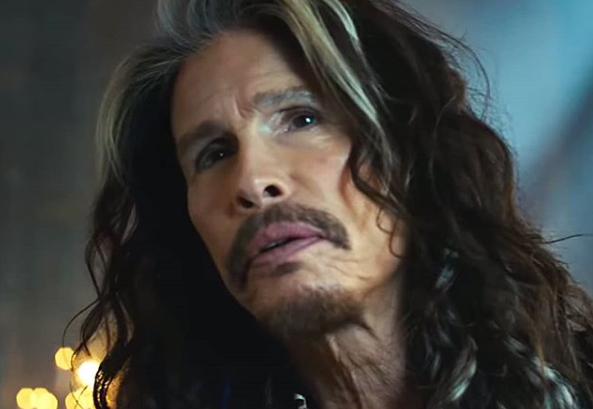 If Only He Could Just Play Himself For The Film

When it comes to Aerosmith biopic film idea, it will be hard to choose who can play and do the same antics Steven Tyler has — He should just play himself like Mr. Burns did in his own “A Burns For All Seasons.

If we could see his life turned into a film biopic then they should choose the right one like what “Bohemian Rhapsody” did with Queen’s Freddie Mercury played by Rami Malek.

There was also a news a couple of years, that a Steven Tyler biopic film was in the making and was being developed by The Da Vinci Code and A Beautiful Mind director Ron Howard‘s production company.

The singer published his memoirs Does The Noise In My Head Bother You? back in 2011 and Ron Howard‘s production company bought the rights to the book.

Tyler told during that year about the likelihood of a film biopic:

“It’s either as soon as the plane goes down, or in my lifetime. I’m thinking since Ron Howard bought my book, his production company is thinking about doing something.”

“My book is called ‘Does the Noise in My Head Bother You?’ It’s collected thoughts. It’s all this shit I’ve been thinking about for 40 years. This whole thing with Aerosmith has been like a dream come true. It’s like it’s been plotted out and planned and written about before. Every time something happens, I think, ‘Is this a movie?’”

But if Aerosmith biopic film will be made who’s gonna step up and play the role?

Here are our picks:

Josiah “Jesse” Camp is a musician and television personality who won the first Wanna Be a VJ contest on MTV.

James could definitely play the part as he can be crazy as hell like Steven Tyler.

Martin Starr can do it, of course, but then again I want Martin Starr to star in everything.

Johnny Depp is definitely a dude, a dude who resembles a lady. How’s that for a Steven Tyler looks?

Neill Byrnes is the ultimate Steven Tyler impersonator and hell can sing like him too. Neill Byrnes of Hingham is the lead singer of Aerosmith tribute band.

What about you? Who’s your top pick?