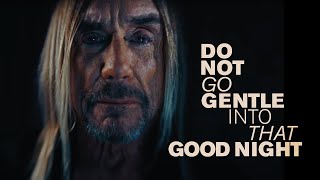 Iggy Pop just released a music video for the song “Do Not Go Gentle Into That Good Night.” The track is taken from his latest album, “Free”, released in September 2019.

An album in which the artist featured collaborators Leron Thomas (keyboards) and Noveller (guitar/voice) and that it received very good reviews both musically, as well as for the themes and depth of the lyrics.

The video made its first appearance at the recent 34th edition of the House of Tibet’s annual concert in the United States, where Iggy was one of the guests who shared their contribution through prerecorded presentations for the event’s live stream.

The video is a performance of Iggy while he is in the foreground, showing only his face as he recites the words of “Do Not Go Gentle Into That Good Night.”

This is not a song as such, since it is a poem that was written by Dylan Thomas, a famous English author who also stood out for his career as a reciter of poetry.

In December 2020, Iggy released a COVID-19 inspired song called “Dirty Little Virus.” The track’s vocals were recorded at Safe And Sound Mobile Studio in Miami by Luis Gomez, while Chris Berry (drums) and Ari Teitel (guitar and bass) recorded their instruments in their respective home studios.