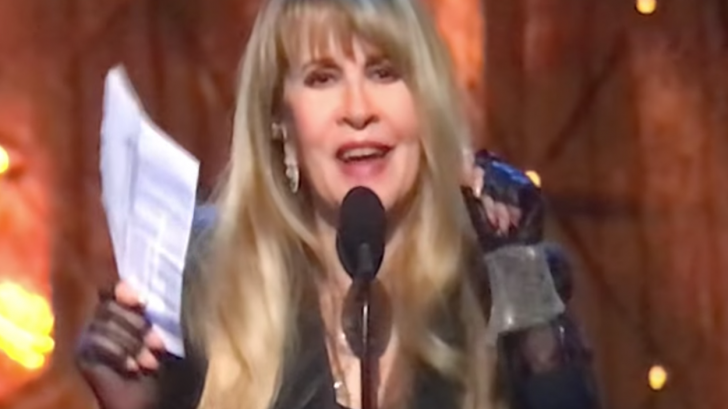 Stevie Nicks Is In!

Friday was a good day to be Stevie Nicks.

Well, everyday is a good day to be Stevie Nicks, but Friday was an especially good day.

As of Friday night, the 70-year-old Fleetwood Mac singer is officially a two-time Rock and Roll Hall of Fame inductee, joining fellow inductees The Cure, The Zombies, Janet Jackson and fan favorites Def Leppard in the Hall’s class of 2019 as the first woman to be inducted twice.

The night began with an emotionally charged introduction from One Direction singer Harry Styles, who was glowing with pride as he prepared to induct his friend and mentor into the Rock and Roll Hall of Fame, calling her “…forever current, she is forever Stevie. On Halloween, one in seven people dress as Stevie Nicks.”

@stevienicks proudly holding her @rockhall award!!! Sorry for the SPAM but this day is to important to wait an hour between each post!! I'll be posting alot so turn on "post notifications" in your settings! #stevienicks #fleetwoodmac #rockhall #harrystyles #stopdragginmyheartaround

He later joined her for a rousing take on “Stop Dragging My Heart Around,” one of several performances that night that featured a laundry list of Stevie’s biggest hits and an extra special appearance from Eagles’ Don Henley, who joined her for “Leather and Lace”.

@stevienicks and Don Henley perform ‘Leather and Lace’ at @rockhall 2019. ✨

But the real magic of the night came when it was time for Stevie herself to take the stage.

Imagine – half a century, thousands of hours spent waiting tables and cleaning houses for a dream no one believed in harder than she did, countless years spent on the road and in the recording studio to bring it all to life and here, on the stage at New York’s Barclays Center, it all came full circle in one gorgeous, emotional moment, and how sweet it was.

But despite the joyous occasion that Friday night’s induction ceremony was, there was an unmistakable note of sadness – one we all expected.

Sure, her brother Chris Nicks was in the audience, as were Stevie’s Fleetwood Mac bandmates Mick Fleetwood, Neil Finn and Christine McVie; but their parents who have both long since passed away, weren’t there to see her big moment. Neither were late legends Prince and Tom Petty, whose presence at the Rock and Roll Hall of Fame induction ceremony would have been the cherry on top.

But the same woman who wrote “Landslide” is the same wise woman who knows that while her loved ones are gone in the physical sense, they were there in spirit – every bit as overwhelmingly proud of her as you’d expect.

“They are in my heart. They walk with me onstage every night. That’s the sadness that there are a few people that I would really loved to have shared this with, but life goes on and they are in my heart, so it’s okay. I have to let that part go.”

Congratulations to the incredible Stevie Nicks – we hope you enjoyed your night, and can’t wait to see what the future has in store for you next!