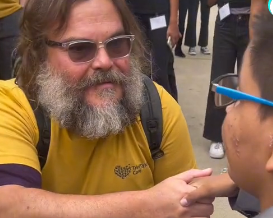 When a little fan in palliative care at TrinityKids Care in Los Angeles requested a famous School of Rock song, comedy actor and Tenacious D vocalist Jack Black personally sang it for the child.

The streetside a cappella performance took place on October 8 during the Layla Paige and Friends Walk for TrinityKids Care, a trek Black organized to raise money for the children’s hospice. Black sings to Abraham, a 15-year-old with Pearson syndrome, according to video his mother was able to record. Abraham has a rare condition called Pearson syndrome.

For Layla’s Walk 2022, Black was joined by more than 500 walkers this year. The charity event honors the lives and memory of Layla Paige, who passed away, as well as all of the patients who have received care from TrinityKids. Paige passed away from a neurological condition in 2017 at the age of 2.

Black’s School of Rock performance in the 2003 movie, which served as its central focus, had the actor singing a portion of “In the End of Time” for Abraham. “You’re not hardcore / Unless you live hardcore,” is the movie’s song line.

“Abraham got to meet Jack Black and sign his favorite part to his Favorite movie ‘School of Rock,'” Veronica, Abraham’s mother, stated in a post. Adding, “trinity care kids and @Jack Black making this all happen!!”