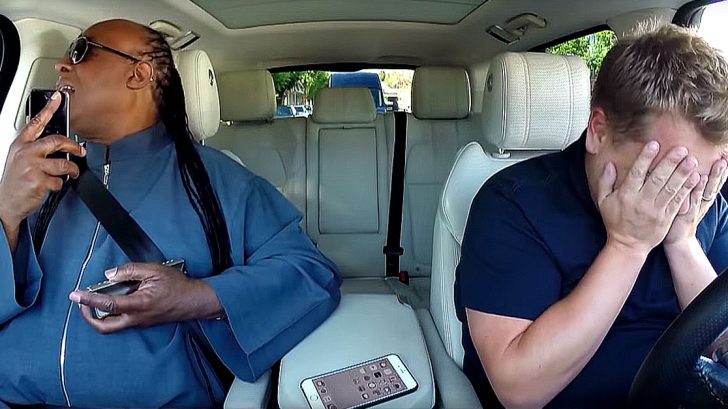 Everyone Else Can Go Home

Alright, it’s no secret that we just really, really love The Late Late Show with James Corden and we love his Carpool Karaoke segments even more. From the Red Hot Chili Peppers to Rod Stewart, it’s always a party when James gets behind the wheel of his Range Rover and cruises through Hollywood with some of music’s biggest legends and sings along with them at the top of his lungs, usually forgetting the questions for his guests that he keeps written on the palms of his hands.

No Carpool Karaoke segment got to us – and James – more than the hilarious, wonderfully touching segment that featured Stevie Wonder in the passenger seat as he took us through songs like “Signed, Sealed, Delivered I’m Yours” and “Isn’t She Lovely”.

Beginning with a gag related to Stevie’s lifelong blindness (don’t worry, it’s nothing offensive!), James’ ride with Stevie Wonder takes a turn for the sentimental when halfway through the ride Stevie calls James’ wife Julia to sing “I Just Called To Say I Love You” and immediately brings James to tears when he changes the lyrics to, “I just called to say James loves you/I just called to say how much he cares,” reducing our host to a puddle of tears for a few moments.

One of our favorite Carpool Karaoke guests in a long, long time, Stevie Wonder is nothing short of phenomenal in this hilarious, heartwarming video that you’ve got to see for yourselves. Check it out in the video below, and happy viewing!