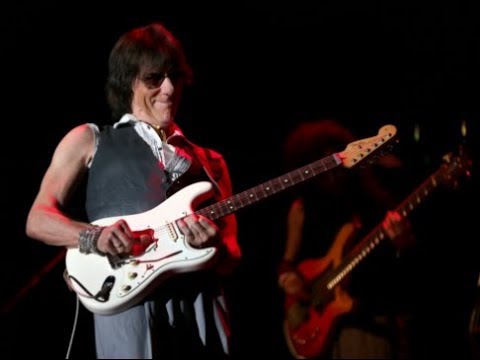 One of the greatest British rock ‘n’ roll guitarists of all time was Jeff Beck. Despite not receiving as much praise as Jimmy Page or Eric Clapton, Beck’s impact on rock & roll and music, in general, was unquestionably just as significant. In the 1960s, Beck was one of the scene’s pioneers and contributed to making London the global center of culture. He gained even more knowledge in fields outside of rock as the years went by, giving numerous stars mind-blowing licks.

The guitarist, who is justifiably recognized as one of the greatest Les Paul performers, had a significant influence on a generation of guitarists who were inspired by his extensive body of work. After Eric Clapton joined The Yardbirds, they were already one of the biggest bands in Britain, therefore Beck had the onerous task of stepping into Slowhand’s shoes. The sight of this challenge would have nearly caused every other guitarist to collapse, but Beck was no ordinary artist and conquered beautifully.

Beck has operated outside of the limelight, silently penning some of the greatest rock and roll songs. The guitarist created some wonderful music with his band The Yardbirds, and rhythm guitarist for that group, drummer Chris Dreja, declared: “Jeff was, and is, a fucking genius.”

Clapton had only kind things to say about his “old nemesis” despite the continual, inevitable comparisons that resulted in a fictitious competition that has persisted over the course of their respective careers:

“I think he is one of the most unique guitar players. And the most devoted. From what I know of Jeff, he’s either fixing his cars or playing the guitar,” Clapton once said.

“There’s no in-between for him. He actually has never changed. Unlike myself, who’s been kinda wandering around a lot of the time…and being led astray. Jeff has been very consistent,” he added.

One of several hard-hitting guitarists of the decade who have expressed their admiration for Beck is Clapton. He most certainly holds the title of favorite guitarist for the guitarist you like most or is at the very least a contender.

We were left wondering who the former Yardbirds member received inspiration from in light of his illustrious credentials and the devastating news of his loss still resonated in our ears. Fortunately, he discussed his favorite solos with Terry Staunton at Music Radar in 2011, providing a fascinating glimpse into the thoughts of one of the greatest guitarists.

‘Race With The Devil’ – Gene Vincent and His Blue Caps

Gene Vincent and His Blue Caps’ 1950s song “Race With The Devil,” which is seen as an early forerunner to the rockabilly trend, is Beck’s first selection. Even while Beck liked Vincent, the song, in his opinion, is all about guitarist Cliff Gallup, and this was one of the final songs he made before quitting the band.

After leaving the Blue Caps, he only released one solo album in the 1960s, which had limited financial success. His career never attracted widespread attention. It speaks directly to the aesthetics Beck would apply to his individual work, positioning oneself as a musical renegade unafraid of success or apparent commercialism.

“Gene’s guitarist Cliff Gallup was an absolute genius,” Beck lamented. “There just isn’t another word to describe him.” Beck is known for his spontaneity onstage, and it appears like everyone in the park appreciates it.. “I read an interview with him once where he claimed that he never worked out in advance what he was going to play, and the idea that he came up with the two guitar breaks on this song on the spot is just incredible,” even exclaiming, “It took me months and months of practice to get anywhere near what he played!”

“There isn’t a dropped note to be heard anywhere, and the tone of the solo is just perfect.” There is no one better for Beck, at least not in the present rock scene. “Hardly anyone in the world today is working with the immediacy and instinct that Cliff had. Jack White probably comes closest to the spirit of Cliff.”

Beck has always been in awe of the work of Django Reinhardt. The Belgian guitarist had a special talent for utilizing just six strings to evoke emotion and tell a tale. Without Django, who was decades ahead of his time, the future of guitar playing might have been drastically different. Beck would learn an important lesson from Reinhardt’s performance style: unconventionality was a weapon to be used with dynamic intensity. The Belgian was lauded by Beck:

“Any serious list of great guitar solos would be incomplete without a bit of Django. I think this is the most wonderful solo ever; what he brings to what is essentially a 12-bar blues is fantastic, taking such a standard template and dressing it up with such lyrical flourishes.

“He makes it sound like some kind of 18th Century chamber orchestra, it’s so beautifully crafted, full of incident and adventure.”

‘Rock Around The Clock’ – Bill Haley & His Comets

Bill Haley & His Comets provided the final list for Beck. Haley is a slightly obscure pick because he isn’t regarded as one of the greatest guitarists of the 1950s, but the former Yardbirds member is enraged by this. Beck is not the only one who loves the song; David Gilmour once said:

“It’s very hard to tell what made me first decide to play the guitar. ‘Rock Around the Clock’ by Bill Haley came out when I was ten, and that probably had something to do with it.”

“Over the years, Haley has been kind of airbrushed out of rock ‘n’ roll history to a degree, partly because he never looked cool, he wasn’t a sexy pin-up like Elvis or Eddie Cochran, and I think that’s disgraceful,” Beck said with displeasure.

“But The Comets were a superb band, especially the guitarist Franny Beecher. What he does here is really special; it’s almost like a jazz solo but doubled in speed, and then it’s got that great chromatic run at the end. It’s pure, beastly rock ‘n’ roll. Yeah, it’s a corny song, and there’s something almost nursery rhyme about the lyrics, but that guitar part really does the business.”