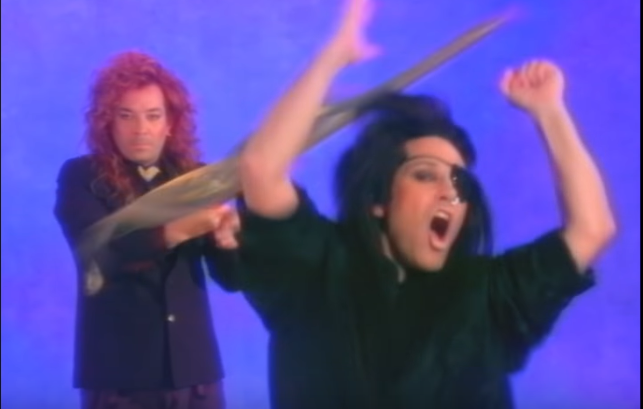 The Ant-Man Is Rocking It!

The late-night King and the Ant-Man teamed up for recreating an 80s video glory, Dead or Alive’s “You Spin Me Round (Like a Record)” on “The Tonight Show Starring Jimmy Fallon” last Thursday night (April 25).

The Dead or Alive’s “You Spin Me Round (Like a Record)”  was a hit in 1984 and reached No. 11 spot on the Billboard Hot 100 chart – Jimmy and Paul did the shot as a total replication, down to the late Pete Burns’ signature eye patch, hip swivels, choreography, and bravado.

The 1985 hit was directed by Vaughan Arnell and Anthea Benton and was created to honor the Hindu God of Protection, the six-armed Vishnu, re-imagined by Burns amidst images of a disco ball and gold flags. Dead or Alive financed the creation of the video themselves according to Burns on one of his interviews.

This is what I meant with posting random shit. HES SO CUTE AND PURE I LOVE HIM SO MUCH OMFG × #paulrudd #antman #cute #marvel #avengers #avengersendgame #wasp #clown #cutie #ilovehim #marvelavengers

“You Spin Me Round (Like a Record)” was originally included on the Dead or Alive album, “Youthquake.”

The song was also featured and was sang and rearranged by Adam Sandler for the opening montage to 1998 film “The Wedding Singer” (set in 1985), and Jessica Simpson recorded a cover in 2006.

Paul Rudd starring in Avengers: Endgame as the Ant-Man, surely nailed the recreation of the video with Jimmy Fallon and added some extra spices for it by using their own vocals.

This wasn’t their first time teaming up for a remake of a music video. The pair teamed up as well to recreate the versions of Styx’s “Too Much Time on My Hands” and Go West’s “King of Wishful Thinking.”