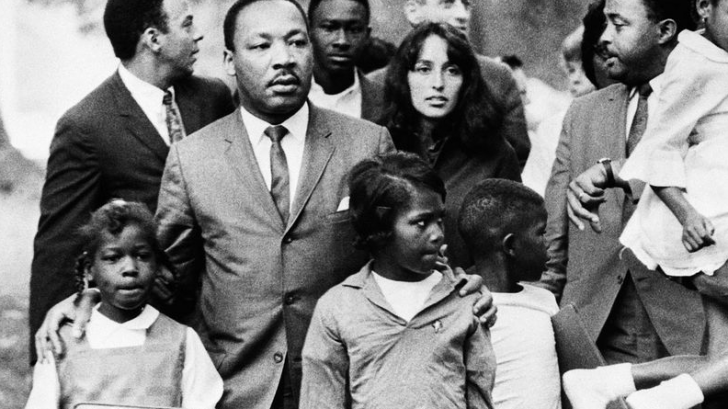 Joan Baez had an early start in the scholarly world, being that her father is a physicist. She was also exposed to classical music at infancy. Giving her song writing talent and political involvement, she dives into literary realms and is an author of 7 books.

Joan Baez has a famous partnership with Bob Dylan. Their relationship is part of an entire generation’s cultural experience. They were both genius songwriters and activists. Dylan put Baez on a pedestal for the better part of their partnership.

She is an iconic song writer, especially of the American-Folk Rock genre. She has written and recorded well over 60 original songs. Joan’s most famous songs include “I Shall Not Be Moved,” “Diamonds and Rust,” and “A Song of Bangladesh.”

7. She Is From A Family of Prolific Status

Her father is a Stanford University Graduate with a PhD in Mathematics and Physics as well as the co-inventor of the x-ray microscope. Baez’s mother was a descendant of the Scottish Dukes of Chandos (she died at 100 yrs. old). The artist’s sisters were also musicians and activists of equal caliber.

Many of Joan Baez’s performances have been at political or social justice rallies and protests- to this day. Baez accompanied and aided the late Martin Luther King Jr. on numerous marches and has devoted her life’s work to the progression of minorities and those in need. She is a true artist for the people.

4. The Queen of American Folk Music

Joan Baez is hands down the undisputed Queen of American Folk Music. Folk music is passed on by oral tradition and  speaks about indigenous people, social rights, and native cultures. Baez was inducted into The Rock and Roll Hall of Fame on April 7, 2017.

Joan began her constant traveling at an early age. Her father’s scientific profession with UNESCO required that her family move often all around the US including international countries like England, France, Switzerland, Spain, Canada, and the Middle East. As she advanced with her activism and music career she traveled all across Europe and Latin America.

Never has Joan ever been thought of as snob, a diva, or reserved. On the contrary, she has always had a shining personality. Usually being light-hearted and silly during press interviews and with fellow musicians.

Joan Baez did not only set out to change the world and music history- she did. Simply by being herself and having enough intent and purpose to put her dreams into action. Thank you, Joan Baez!