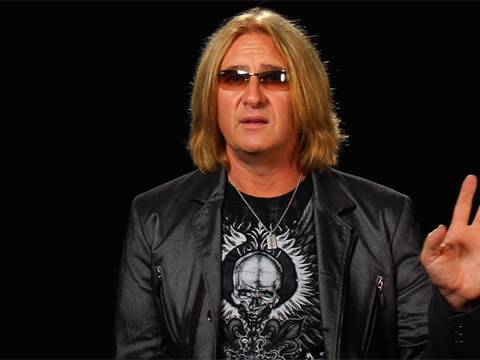 Even though some people find it hard to plan for their death, Joe Elliott has begun and created a playlist of music that will be played during his funeral. Even while some of the performers on the list will be well-known to the rocker’s fans, there are a few songs on it that no one would have anticipated being performed at a memorial service.

When Elliott joined Kylie Olsson’s podcast “Music And Me” in 2018, he discussed his funeral arrangements. The artist said that he had already prepared his will when questioned about it, and he even named the songs he wanted to be played at his burial. Both Mott The Hoople and The Sensational Alex Harvey Band are on the list, and as Joe Elliott’s ardent supporters are aware, he adores both groups and has shared the stage with them in the past.

One song that would not be anticipated to be played at a funeral is “All The Young Dudes” by Mott The Hoople, and Joe Elliott highlighted this by remarking that it doesn’t seem like a death march. Similarly, “Anthem” by The Sensational Alex Harvey Band has a New Year’s Eve vibe to it. He did admit, though, that he thinks it would be lovely if they were played at the scattering of his ashes. He said that he intended to include humorous, sarcastic songs on the list but had not yet determined what they would be.

Here are Joe Elliott’s preparations for his funeral, including the music he chose:

“Well, I’ve already written it into my will that I want ‘Anthem’ by The Sensational Alex Harvey Band; ‘All The Young Dudes,’ of course, by Mott The Hoople; and probably ‘Rest In Peace’ by Mott The Hoople, which is an obvious choice, but it’s just a great song. I might even record my own version and get them to play me doing it. Yeah, just play my own funeral.

It’s been overdone to play things like Monty Python’s ‘Always Look On The Bright Side Of Life,’ because it’s been done. But I will probably throw in some ironic song that will make the ones that are sniffling burst into laughter. I’ve got to throw something mad in there; I don’t know what it is yet. But ‘Dudes’ and ‘Anthem,’ because they’re grand and they sound like…

Well, ‘Dudes’ doesn’t sound like a death march, but ‘Anthem’ by The Sensational Alex Harvey Band has got the drum roll and the piano and then the bagpipes come in and take you out. It’s almost like a New Year’s Eve song; it’s very Scottish. And it sounds like a great song to see my ashes blow off into the distance — hopefully in quite a few years’ time.”

Joe Elliott has over 50 years of experience in the music business. He recently performed on stage with his band for the Stadium Tour, which is now regarded as one of the most important tours in the modern metal scene, demonstrating that he hasn’t lost any vigor despite his advanced age. I’m hoping he will perform on stage for a very long time.