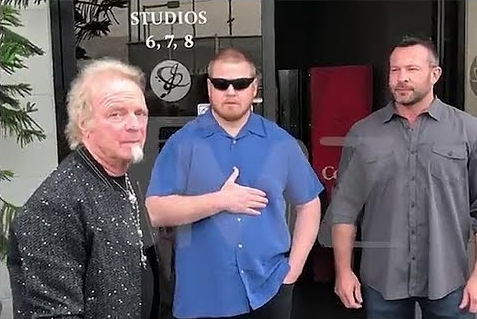 TMZ obtained a video showing that Joey Kramer arrived during Aerosmith Grammy rehearsal in L.A. and two security guards denied him access. Though the guards were just following instructions to refuse Joey’s entry given by the other 4 members of the band.

Joey, on the other hand, disputes that he was given a rehearsal schedule from the band on January 18 which is why he flew to L.A. the next day.

“The band waited until January 15th to tell me that they weren’t letting me play at the awards ceremonies this week. I can hold my head high knowing that I did the right thing – to fight for my right to celebrate the band’s success that I have dedicated the better part of my life to sdfgdsfgdsfgdfgfgfsghelping build.”

“The band’s offer to allow me to participate in this week’s MusiCares and Grammy celebrations for red carpet photo ops only, is appreciated; however, with a fill-in drummer playing on stage at two events honoring our collective musical contributions, it is extremely hurtful to me. I am a professional musician who is eager to return to my rightful place with Aerosmith.”