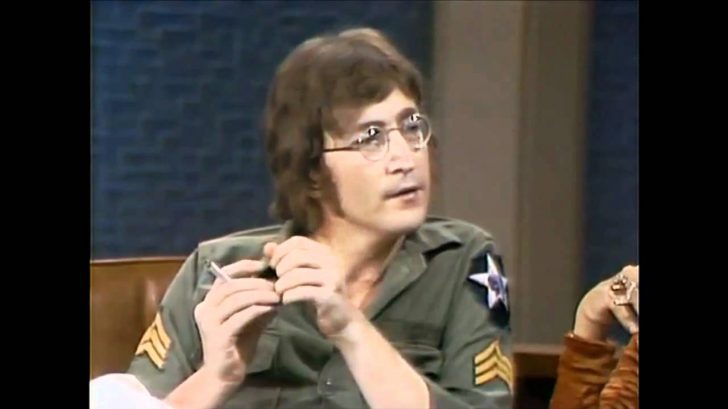 Lennon’s analog playlist for the singles collection, which included folk, rock, rhythm and blues, and Motown music, served as a window into his wide-ranging musical tastes. The Lovin’ Spoonful, Smokey Robinson, Bob Dylan, Paul Revere & the Raiders, Buddy Holly, Little Richard, Chuck Berry, and more were all on the playlist, as well as the only female musician in his Discomatic: R&B singer Fontella Bass and her 1965 song “Rescue Me.”

John Midwinter, a music producer from Bristol, spent years restoring and researching all the 45s Lennon personally placed inside, along with his handwritten notes around some of his favorite songs, after Lennon’s old jukebox reappeared at Christie’s auction in 1989 and sold to him for £2,500 (roughly $2,770).

Midwinter hoped that word of Lennon’s musical jukebox would get out before his death in 2004 from throat cancer. Later, on the British arts show The South Bank Show, a documentary including interviews with Lennon-inspired musicians and others who had recorded some of the songs in his music box was broadcast.

“Brown Eyed Handsome Man” was first issued as a B-Side to “Too Much Monkey Business” and subsequently on Berry’s 1957 debut After School Session. It was originally written and recorded by Chuck Berry, whose 1964 rock smash “No Particular Place to Go” also appeared on Lennon’s playlist. Numerous singers performed the song, including Buddy Holly, whose rendition debuted at No. 3 four years after his passing in 1959.

The Beatles first saw Little Richard in November 1962 when performing at the Star Club in Hamburg, Germany during their second engagement. The two artists frequently shared the stage together and grew close. With his 1956 song “Slippin’ and Slidin’ (Peepin’ and Hidin’),” the 1957 single “Long Tall Sally,” and “Ooh My Soul,” from Richard’s self-titled breakthrough album, Little Richard has three appearances on Lennon’s Discomatic compilation. The song “Ooh My Soul,” which The Beatles subsequently recorded in Manchester’s Playhouse Theatre with McCartney singing lead, was eventually made available on their 1994 compilation Live at BBC.

Gary U.S. Bonds, the primary act before The Beatles when he toured Europe in 1963, sang “New Orleans,” which was released in 1960. The song was featured on Bonds’ 1961 album Dance ‘Til Quarter to Three with U.S. Lennon expanded his collection of 45 records by adding two Bond songs from the album, Bond and. Lennon also included Bonds’ No. 1 single from the same album, “Quarter to Three,” which was written by Gene Barge, Frank Guida, and Joseph Royster.

“That’s me trying to be Smokey Robinson again,” Lennon wrote in his Discomatic annotations, comparing The Beatles’ 1963 smash “All My Loving” to something Robinson may have written. “I’ve Been Good to You,” “Who’s Lovin’ You,” “The Tracks of My Tears,” “Shop Around,” and “What’s So Good About Goodbye” by Robinson and the Miracles featured multiple times on Lennon’s playlist, from the band’s third album I’ll Try Something New.

Bob Dylan released “Positive 4th Street,” the follow-up to his chart-topping single “Like a Rolling Stone,” between his Highway 61 Revisited and Blonde on Blonde albums, but it was never featured on either. On July 29, 1965, it was originally recorded in New York City. The Beatles briefly practiced “Positive 4th Street” while recording Let It Be, but they never produced a professional version.

The renowned British Invasion band The Animals was more R&B focused than the Fab Four. The band’s adaptation of Sam Cooke’s 1962 smash song “Bring It on Home to Me” was included on Animal Material, their third album, which was a compilation of singles and other unreleased tracks not present on their first two albums.

The Big Three, a Liverpool-based band that was also active in the 1960s, were formed in 1963 and underwent a number of lineup changes before releasing their sole album, Resurrection, in 1973. Jerry Leiber, Mike Stoller, and Richie Barrett wrote the song’s lyrics; The Beatles covered it in 1963 for their single “Some Other Guy.”