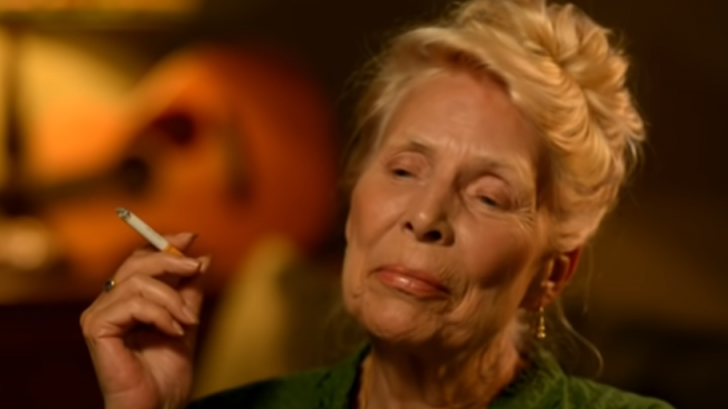 Joni Mitchell is one of the great divas of songwriting that emerged in the late 60s, like Carole King or Laura Nyro, mirror of countless later singer-songwriters such as Jewell, Tori Amos, Liz Phair, Natalie Merchant or Fiona Apple.

Her forays into folk or jazz with highly emotionally charged texts are some of the best female legacies in the history of music, equivalent to the most important works of the most folk Neil Young, Van Morrison, Leonard Cohen or James Taylor.

When she wrote the album “Blue,” she revealed that she was in a immense emotional state that almost led her to quit music and can’t stop crying for a year. The album “Blue” is one of its peaks, a very naked, intimate, sensitive, personal, autobiographical folk album, which creates scenarios of desolation but also of hope, of love encounters and disagreements with mature and sincere texts in a poetic key.

She was exhausted of her fame and success, which she deserved, of course, she quit music for 2 years.

“I quit for two years. This was at a time when, like I told you, money and success, somehow or other, seemed distasteful to me,” Mitchell revealed in the book Joni Mitchell: In Her Own Words by Malka Marom. “It seemed out of proportion to what I had done.”

But her, well deserved success gave him two personalities.:

“I remember being incredibly grateful when people wanted to talk to me, or to tell me they liked my music,” she said. “Later on, I didn’t want to hear it, and I didn’t want praise or criticism. I couldn’t handle either one of them.”

During her break from music , Mitchell admitted she couldn’t stop crying.

“I hadn’t cried for years, but at that time I cried all the time. They walked on the moon, I cried. Everything made me cry.”