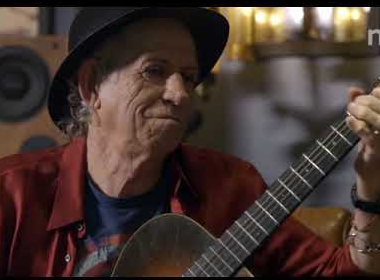 The Stones guitarist revealed his favorite guitar, and you probably know what it is, a Fender Telecaster – the “Micawber.”

The most famous, most photographed “Stonian” instrument par excellence, “Micawber” owes its nickname to the hero Wilkins Micawber, a character in the novel: David Copperfield, by Charles Dikens. There are exactly ten years of difference between the guitarist of Rolling Stones and this famous Telecaster because, according to Johnny Starbuck the technician who takes care of the guitars of Keith Richards, it dates from 1953 and even if at the present time the body and the handle are still original they have all times undergone significant changes.

The most notable of its changes is first the Gibson “PAF” type humbucking pickup that the guitarist installed in the neck position. The latter was fitted to Micawber shortly after its acquisition and an amusing and important detail; this pickup is positioned upside down with its adjustment screws towards the bridge, somewhat reminiscent of the Les Paul Greeny.

Another important factor in the sound of “Micawber”, and therefore of “Keef”, lies in the particular wiring of its microphones which couples the two sets even when the selector is in the neck or bridge position. On the other hand, the tone potentiometer is no longer used at all to change it but rather works as a kind of pan between the two microphones thus offering sound combinations that are unique to it.

And of course those famous five strings necessary to make the riffs of ” Honkey Tonk Woman ”, of ” Jumping Jack Flash ”, ” Start Me Up ” sound just right, and so on… The string benefits very modern mechanics to maintain accuracy on a pulling harder than the standard reference. In fact, Keith Richards has his own selection from manufacturer Ernie Ball. The sets provided by these have five strings ranging in gauge from 0.11 for the thinnest to 0.42 for the thickest.

Keith Richards admittedly committed a lot of alcohol and drug abuse, but today he recently said that it was all well and done, except for a little glass of wine every now and then, he doesn’t want it anymore!