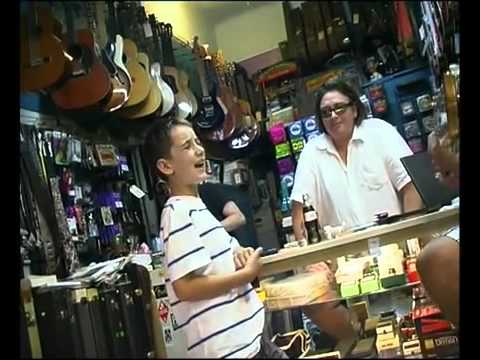 The Store Owner Probably Wants 10% – if you know what I mean.

Most people spend years to master singing – then there’s this kid, who ultimately impresses people, including the store owner at a local guitar shop. When the kid started singing, the store owner, as soon as he heard his voice, interrupted the kid who was about to belt The Blues – the reason, he can’t believe what he heard!

Dan Courtenay, the owner of the guitar shop located in New York, thought that the 13-year-old then Brendan MacFarlane has an incredible voice and he couldn’t believe it.

The video was taken in 2009 and was later uploaded to YouTube back in 2011 – even if the camera is not of good quality like — most cameras at the time, the sound totally captured the kid’s awesome voice – and for that we’re grateful.

As the video began, Brendan started singing his own version of Sam Cooke & Soul Stirrers’ “Just Another Day”. As he belted out the opening lyrics, the store owner was open-mouthed and was in shock. Few verses into the song when the owner told him to stop. The dad thought they were about to be asked to leave the premises but the owner immediately explained that he needs his camera and record the whole thing by saying, “I don’t freaking believe what I’m hearing, so I want to be able to record it to show my friends, okay?”