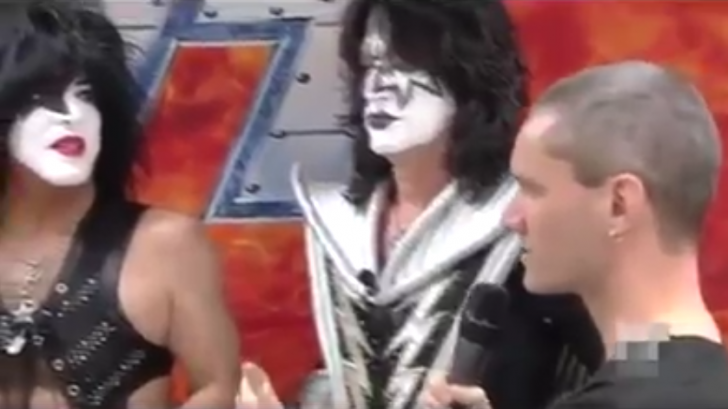 INSECURITY AT ITS FINEST!

Ridiculous, it just really shows how insecure K.I.S.S. are as a band. Humiliating someone like that in a live interview is inequitable. I guess the poor guy could have just tried harder and worn a t-shirt with Ace Frehley’s face on it.

KISS were obviously very intimidated and had a mindset like it was a competition. They WERE pretty disrespectful to Iron Maiden. The fact that Bruce Dickinson is a self-proclaimed KISS fan and loves Paul Stanley solo album.

As for KISS fans, you would definitely feel ashamed of why your favorite band did something like this. Degrading a human being in front of a camera, who cares if the interviewer is wearing an IRON MAIDEN T-SHIRT? Paul Stanley should really GROW UP.

Well, knowing that Iron Maiden is a far better band, they felt threatened for a reason. Honestly, there was not much to expect. Kiss were never really into the rock-ethos of support and co-operation. They were more of a branding and merchandising band. A money-business band right from the start. Not really caring for rock n’ roll attitude. Bands like Iron Maiden started their career because of the love for music. KISS never did, they are more of business right from day one. That’s how KISS look at themselves. In their world, there is only competition.

They even openly admitted that money is everything and that’s the only thing they cared about. Competitive attitude and business-minded are always egotistical and unsupportive. No wonder that they are too.

For those who really know, it’s not much of a surprise when you see this. You’ll just wonder why so many have always accepted and loved such a band.

KISS, demands from the interviewer to take off his IRON MAIDEN t-shirt?

KISS, demands from the interviewer to take off his IRON MAIDEN t-shirt? Comment below your thoughts!.Have you visited our Metalhead Community Blog yet? https://HeavyMetalTshirts.net/.#kiss #ironmaiden