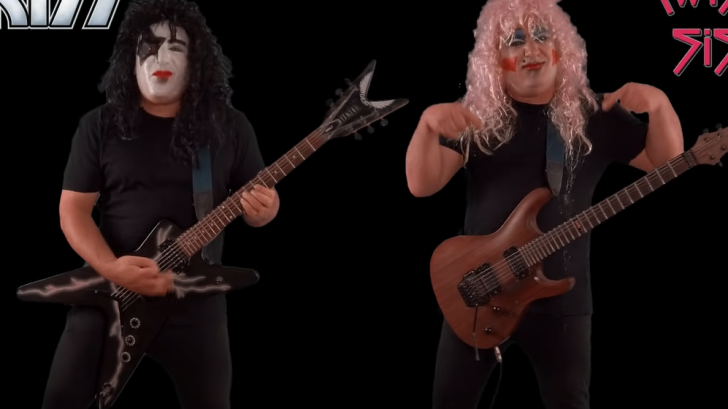 KISS was undoubtedly one of the groups that have known how to exploit makeup the most, joining it to a delirious show full of lasers, explosions, pyrotechnics, flames, dragons spitting fire, vomiting blood and flying to the top of the stage. Undoubtedly, this group formed by Gene Simmons – the devil-, Peter Chris – the cat-, Paul Stanley – the star boy – and Ace Frehley – the space boy – influenced an entire generation to such a degree. , that literally all kinds of merchandise with the Kiss brand could be acquired, pajamas, sleeping bags, toys, costumes and even a comic written with part of his own blood that was mixed with the ink at the time of printing.

On the other hand, without a doubt another band that helped write the glorious pages of the 80s and it was Twisted Sister. Led by Dee Snider, Twisted Sister became the family band of the early 80’s. Their adrenaline-pumping concerts, as well as their “We`re Not Gonna Take It” and “I Wanna Rock” videos flooded the MTV lineup, launching them to instant stardom. Overnight Twisted Sister became the band of choice, not just for rock lovers, but for the entire family. The albums “Under The Blade”, “Stay Hungry” and “Come Out and Play” marked an era. Unfortunately the massive success that they’ve enjoyed momentarily, attracting even an audience under the age of ten to their concerts, had negative consequences for their credibility and contributed to his decline.

Needless to say, in the video below – a guitarist from YouTube finds out who has a better riffs between these two gigantic, make-up band. If you ask our opinion, well, KISS’ songs are more elaborate, Twisted sister’s is more simple riff and it’s always desired – but, of course, both are great bands…KISS definitely influenced Twisted Sister — even thought they won’t admit this because the early 80s’ were ruled by Dee snider and the gang. — in many ways.