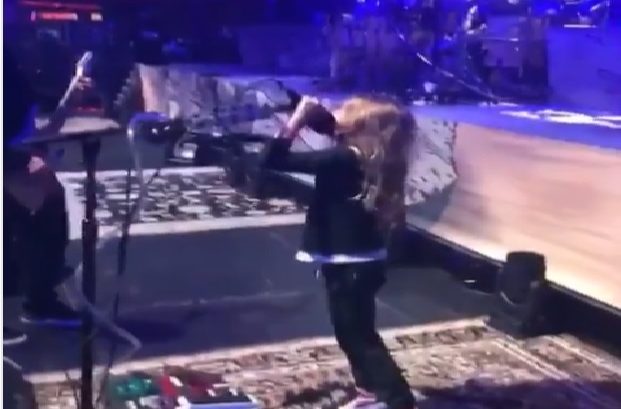 This Is Too Precious, Please Help

This five-year-old kid right here got a mean scream. Trust me, I know, kids like this are pretty good at screaming, ask a Preschool Teacher, and this ain’t no joke. He’s actually kinda IMPRESSIVE!

The 5-year-old kid named D’Angelo Draxon Shaffer is the son of Korn guitarist James “Munky” Shaffer who he recently brought on stage during the band’s rehearsals to do some of the vocals to the song “My Gift To You.” James Shaffer shared a clip of the father-and-son precious moment on Instagram which you can watch below.

The fact that the title of the song is “My Gift To You”  and being sung by a five-year-old makes it even better. It’s one of the cutest things we’ve seen all year long, and kids rocking out and having a musical interest and talent – it’s really one of the best by a long shot!

“Follow my badass firstborn son @dangelodraxon to watch him slay the stage at just 5 years old!” Munky wrote. “This was the rehearsal before our LA show with @rayluzierkorn.”

Recent KORN news, drummer Ray Luzier recently took back his claim that they will be releasing a new record in March next year.

“Disregard what I said in the Sabian interview [where the March release was revealed], there’s no release date yet kids!” he wrote in a post via Instagram.

During their September 12 show in San Francisco, Jonathan Davis (frontman) broke down in tears during an emotional first show since his wife Deven’s passing. A press statement confirmed his wife passing on August 17,

“The Davis family is brokenhearted over the devastating loss of Deven Davis. We ask that you respect their privacy—and the privacy of those close to the family—and allow them the space to mourn in private. We thank you for your love, understanding and prayers of support during this difficult time.”