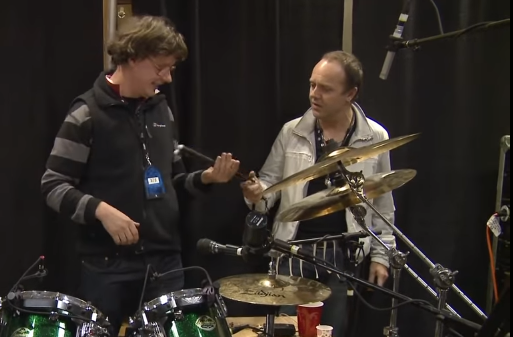 A clip of Metallica’s drummer Lars Ulrich circulated on the internet, the thrash metal legend can be seen spending some time backstage with a fan who has autism.

The clip was taken from the 2012 documentary Mission to Lars, a documentary film that follows the diehard Metallica fan Tom Spicer in meeting his favorite drummer. Spicer’s health case is called Fragile X syndrome – sort of autism or learning disability, a genetic condition that causes a range of developmental problems.

The video clip was taken during the band’s arena tour following Death Magnetic album release. The clip is very touching as you can see the face of the fan filled with joy as his dream come true to meet the rock legend and other players as well such as Kerry King.

“See that guy, he plays in a band called Slayer,” Ulrich catches Spicer’s attention pointing the guitarist at one point in the short section of the film. “This is Tom, he came all the way from England to see Metallica.”

Keep going for the video below, and watch the Mission to Lars clip that was recently re-shared on YouTube.