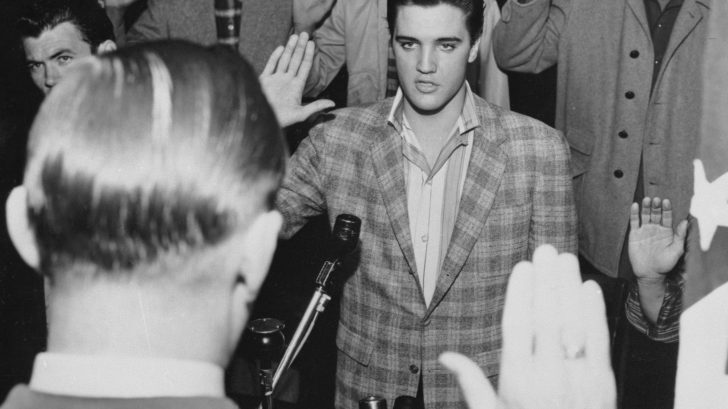 (Original Caption) 3/24/1958-Memphis, Tennessee: Singer Elvis Presley is sworn into the army here March 24th by Maj. Elbert P. Turner (foreground, back to camera). The 23-year old Rock 'N' Roll singing star said he was "dreading the haircut I'll get tomorrow," but hopes to be treated "no different than the other boys in the army."

Madonna has always been open about her spiritual life. During an interview, her brother-in-law said that she told him that she met the ghost of Elvis Presley. His brother-in-law saw this statement as arrogant.

Madonna and Elvis Presley not only share being the king and queen of their respective genres. And it is that there are multiple coincidences that unite the artists, such as the date of August 16. It was on a day like that that the King of Rock passed away and the Queen of Pop was born. Although the first was in 1977 and the second in 1958. However, there is a curious story that would unite the musicians even more – and it’s Madonna’s story of her meeting Elvis Presley’s ghost.

Madonna’s brother-in-law Joe Henry posted the story on his Facebook, “I have told this tale before, but it bears repeating: when Elvis Presley died on this date in 1977, this upstart professed in real-time that she felt his spirit had passed out of his body and through her own in exodus,” Henry wrote. “I laughed at her then for such outrageous self-possession, at the arrogance that I assumed must allow her to declare such publicly.”

He told the story again during a 2017 interview with The New Yorker, noting that he thought Madonna was just arrogant with the story of Elvis’ ghost passing through her – and he also said that he can’t disprove want her sister-in-law said.