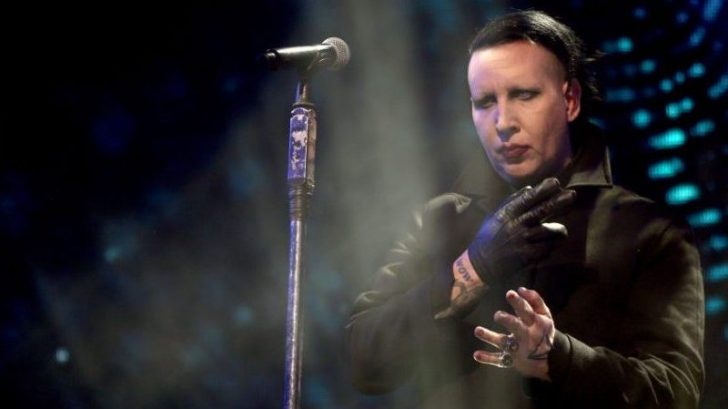 Manson collapsed on stage during his performance in Houston, TX August 18 before ending the show.

According to the reports, Manson’s tour manager escorted out the photographers from the pit before Manson starts out his set at the Cynthia Woods Mitchell Pavilion because the infamous singer was feeling very sick and did not want any photo taken.

The report also noted that Mason was “mostly stationary and visibly shaking at times while he braced himself with the microphone stand,” between his five-song set before he collapsed.

Manson inferred a case of “heat poisoning” before starting performing his third song, “This Is The New Shit,” and before collapsing on top of one of the monitors.

Manson managed to sing one more song — his 1996 title track classic “Antichrist Superstar” before heading backstage. Rumor as well that “talk backstage speculated that it was a horrible case of food poisoning” that caused the singer to stop the show early.

During Zombie’s headlining set, he talked about Manson’s well-being prior to performing what should have their duet on a recently-released cover of a Beatles classic.

“Unfortunately tonight, my good friend Mr. Manson is not feeling too good,” Zombie told the crowd, “Why are you booing him, he doesn’t feel good; I can’t help it. He is under the weather, unfortunately, feeling like crap, and wishes he could be here right now to do this with me because it takes two to tango when there’s twins of evil involved. I guess I’ll do this one solo …we’ll scream real loud…he’s probably on the bus feeling like crap… we’ll make him feel better, man”, as the band began “Helter Skelter.”