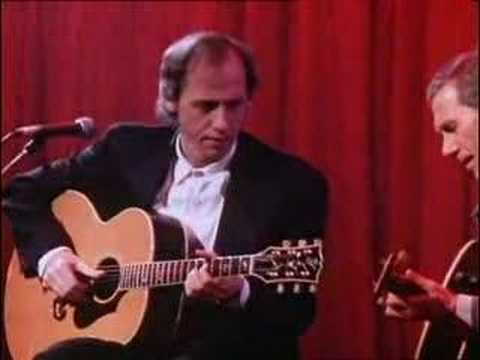 It doesn’t get any much better than Chet Atkins and Mark Knopfler performing music together, isn’t it? The two legendary guitarists are definitely enjoying the delight, and challenge, of performing together.

The video below was taken during the pair’s show at the Secret Policeman’s Third Ball, a set of charity fundraiser gigs held at the end of March 1987. They started with a pretty Atkins-y take on the famous “I’ll See You In My Dreams” before relaxing down for John Lennon’s “Imagine.”

The duo without their acoustic guitars are usually connected with: Chet and his nylon-string; Mark with his 14-fret National Style 0.

The collaboration was indeed conducive for the two musicians, rejuvenating both and becoming the very reason that the two recorded an awesome album together, Neck and Neck, which was released in1990 and scored two Grammy awards: Best country vocal collaboration for Poor Boy Blues and the second one, Best country instrumental performance for So Soft Your Goodbye.

Keep going for the video below and watch Mark Knopfler And Chet Atkins Teams Up For Instrumental Guitar Medley 1987: