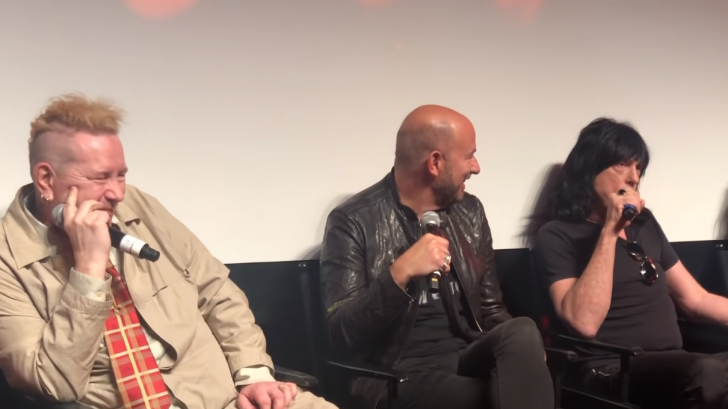 That’s A Harsh Thing To Say

“[You’re] not even an original Ramone!”

Johnny Rotten – they don’t call him that just for fun.

According to the report, Lydon mocked Ramone’s comments about their legacy.

“[You’re] not even an original Ramone!” Lydon quipped, to which Ramone replied, “But I did the Blank Generation album with Richard Hell, and you took his image. All you guys took Richard Hell’s image. That’s all you did.”

Things got even better when (below is the full transcription of the heated discussions as provided by Rolling Stone:):

“And you’re still covering your fucking ears,” Lydon said, grimacing that he’d gotten a rise out of the drummer.

“And Sid Vicious was the star,” Ramone said, prompting Lydon to smile and stick his tongue out. “That’s right, he was,” Lydon replied. “He was the star for asshole fake idiots like you. Enjoy your drugs and fuckin’ have a happy death.”

Lydon then continued his attack on the drummer. “Punk music for me was positive, proof positive, that we could change our lifes by music, meaning what we said, attack the political systems,” he said. “This daft cunt is into fucking drugs.”

“You talk the talk, but you didn’t do the walk, just like the MC5,” Ramone said. Lydon then stood up and danced around, “Hello, Johnny Rotten never did the walk?” Then as Ramone continued, Lydon looked at him and said, “Look at you, you look like a heavy-metal fucking reject.”

“Sit the fuck down,” Ramone said.

Lydon even targetted Henry Rollins, Black Flag’s frontman in which he remarked: “Henry, we ain’t never met before, have we?” You’ve said silly things but excellently good things, too.”

“And you called Black Flag a bunch of suburban rich kids and we wanted to tear your ears off,” Rollins replied. Responded Lydon, “Yes, I did, but I didn’t like the fucking music. It was boring!”

Then he went way too far by mocking Rollins’ singing:

“When the Sex Pistols came to you, you ain’t heard anything that good, and you know it. You could hear everything clearly, and those words put me in the houses of Parliament under the ‘Traitors and Treasons Act’, which at that time carried a death penalty. So, don’t talk Black Flag, Pink Flag, or White Flag.”

Though Rollins kept his cool and took it as laughable.