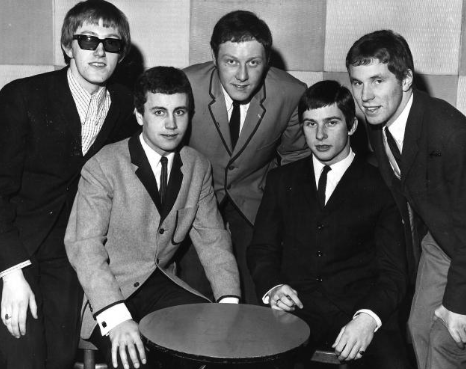 The story of David Bowie and the Beatstalkers

In the mid-1960’s, there was a young Scottish band called the “Beatstalkers” and when they were just starting, they teamed up with a young David Bowie to write and record a series of singles. When they had their collaboration locked-in, they believed they were bound for stardom. The five-member group started as a school band in the Scottish city of Glasgow, which back then was a place of violence and poverty. Despite their humble roots, the Beatstalker actually became the biggest band in all of Scotland, even bigger than the Beatles. Before they journeyed to greener lands in London, singer Davie Lennox, bassist Alan Mair, keyboardist Eddie Campbell, guitarist Ronnie Simpson and drummer Tudge Williamson (soon to be replaced by Jeff Allen) were already big names in their hometown, who drew around 7,000 fans when they performed at Glasgow’s George Square on June 11, 1965. That event also became known as the George Square Riot because the crowd surged forward and the stage started to collapse.

The George Square Riot gave the necessary publicity for the Beatstalkers as they were regularly featured on the front page of every mainstream publication. Until the riot, no other Scottish band had achieved such coverage – and they were still teenagers at the time.

The band then scored a record deal under Moody Blues producer Denny Cordell but Cordell apparently did not know what kind of music the band would sell and they went off the rails while with him. The singles they released were all lukewarm.

Kenn Pitt, who was working with David Bowie at the time, orchestrated the Beatstalkers’ move from Decca Records to CBS records. Pitt believed that teaming the band up with David Bowie would be a good idea for the band to gain some traction in the business.

“David’s talent was obvious,” singer Davie Lennox says. “But he was still learning how to use it. The stuff he was writing meant nothing to us. ‘Silver Tree Top School for Boys’ was based on a true story about a scandal at a rich boys’ school. We were from Glasgow! It meant nothing to us. He wanted it sung a very specific way and I just couldn’t do it. It wasn’t written for my voice. It was written for Anthony Newley because that’s who David was into. David played rhythm guitar and backing vocals, and I remember being in the recording booth, glaring at him while we sang it. ‘Silver Tree Top School for Boys?’ I’m from Govan – I’ll lamp you!”

Just because their styles of music were different, doesn’t mean they didn’t get on well.

“He was a very nice guy,” Lennox recalls. “We got on like a house on fire. Although he was always selling me charity scratch cards because his dad sold them. Every time I saw David Bowie, it cost me money. And he was always borrowing cigarettes from me. It seemed like I was the only person in London who could afford cigarettes! You could say he climbed over us to improve his own career, but it wasn’t personal. He wouldn’t have done anything to deliberately damage us. The thing was, as far as the label were concerned, we were the band. We were going to be big. David just hadn’t learned to control his talent yet. If it had been a year or two later … ”

Though Bowie was friends with the band, in the music business, sometimes it’s inevitable that some people will get trampled back to the ground in order for one or two to rise up the rungs of the ladder.

There was one terrible tragedy that ended it all for the band: when their van, complete with all their equipment, was stolen, they decided to call it quits.

A happy turn out to note was that the band, most especially bassist Alan Mair, remianed friends with Bowie even after their fall out. When “Space Oddity” became a hit in 1969, Bowie went looking for Mair, and found him at London’s Camden Market. Mair was selling his custom-made leather boots that had become uniform for most of the fashionable bands of the era.  Mair told Bowie, “You can have a pair of boots on me. Freddie will fit them for you.” It was Freddie Mercury who was yet to be famous, that was working as Mair’s assistant.

*Story adapted from the Beatstalkers’ interview with Ultimate Classic Rock.