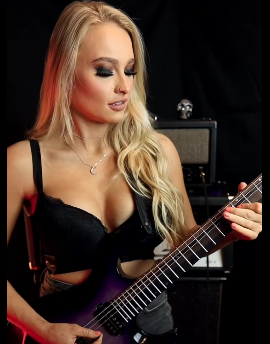 Whitesnake’s Here I Go Again guitar solo is covered in an incredible and utterly unique way in the video below.

Sophie is the queen of “Shredding,” a guitar soloing technique. This is just a quick note progression played on a guitar. Sophie’s performances differ from those of certain other guitarists who employ this method in that Sophie maintains her solos engaging and technically appealing. While playing a large number of notes quickly may appear remarkable, making them sound superb at the same time takes true expertise.

Her YouTube channel, which she began in 2011, has over 54 million views as of December 2020. Her work is catchy and visually stunning, and we’re confident she’d be a godsend in a recording studio. Her two of the most popular YouTube videos are both original pieces, which shows you all you need to learn about this accomplished guitarist.