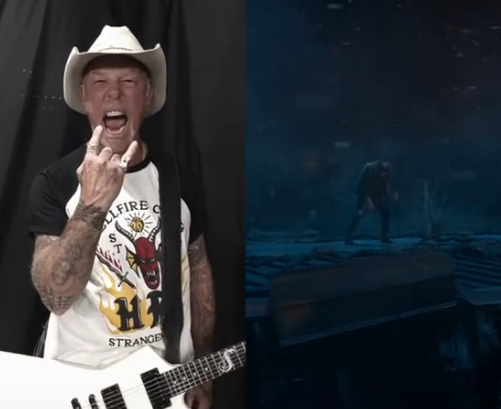 The legendary heavy metal group continues to show its gratitude to the Duffer brothers for having included their song in the new season of Stranger Things.

In addition to showing us a new villain from the world Inside Out and bringing us back some of the most beloved characters on television, the fourth season of Stranger Things has also served to return to the top of the music charts two mythical songs from the 80s very different from each other.

If in the first part of Stranger Things 4 we heard Kate Bush’s song, Running Up That Hill, in the second part of the season, the one who has stolen the spotlight has been the version of Master of Puppets of Metallica that plays the character of Eddie Munson at a key moment in which the protagonists are in the world Inside Out.

Currently losing my mind over @Metallica duetting with Eddie Munson on Master of Puppets! pic.twitter.com/CKyhaLVRiB

The official Netflix account, which has shared the video on Twitter, has also commented on the Californian band’s TikTok post, writing “hellfire club forever”. Previously, Metallica had already thanked Stranger Things for their presence in the series through a statement on Instagram. “It is an honor to be part of Eddie’s journey,” they say in the text that accompanies the publication.

Thanks to their presence in Stranger Things, Metallica has managed to bring Master of Puppets back to the charts on platforms like iTunes or Spotify. So has Running Up That Hill, the Kate Bush smash hit that plays at the beginning of season four.