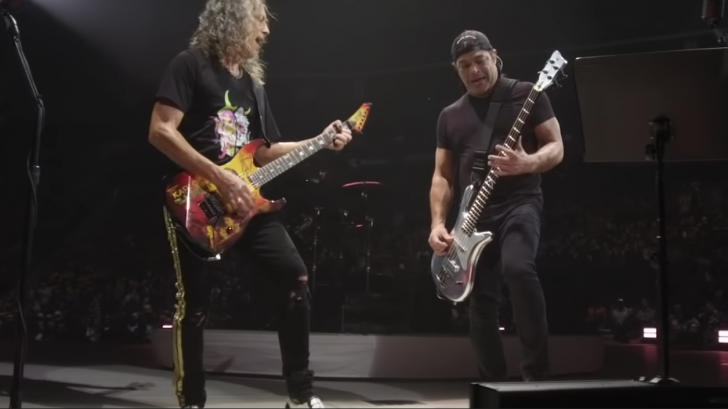 They do it all the time and it’s never any less awesome, but there’s something about seeing the guys in Metallica cut loose with their favorite songs onstage!

Rapidly losing their ability to take themselves too seriously these days, Metallica delighted the crowd at the Sprint Center in Kansas City, MO last night when they stripped their stage set up to just bassist Rob Trujillo and guitarist Kirk Hammett, trading up their usual bruising, unrelenting brand of thrash metal in favor of Pink Floyd’s “Run Like Hell,” in honor of guitarist David Gilmour, who celebrated his 73rd birthday yesterday.

When placed in the hands of Rob and Kirk, however, “Run Like Hell” turns into a fun, earnest jam between friends in honor of a man they both fiercely admire. Wanting to make the moment as special as possible, Rob tells the crowd at the beginning of the performance that he wants to have fun and turn it into a celebration – and a celebration it was!

It's David's birthday today. Thank you to everyone who's sent their best wishes. (? Jill Furmanovsky)

In a world where people take everything a little too seriously, it’s an absolute joy to see Rob Trujillo and Kirk Hammett jamming to the least metal song ever written. It’s even cooler to see the audience shamelessly singing along with them, word for word. If this doesn’t make you smile at least once today, I’m not sure what will! Check it out in the video below and remember: this is fun!