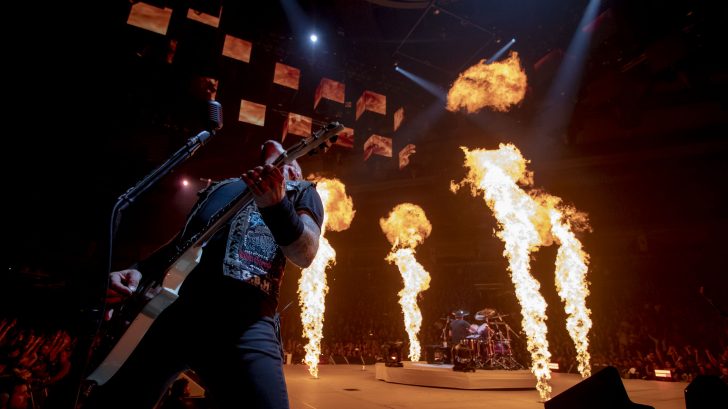 Showing Everyone How It’s Done

The boys just knocked it out of the park – yes, even Lars Ulrich! If you haven’t been to a Metallica concert, this will make you want to buy a ticket ASAP. It’s everything you want in a rock concert and more – high energy, wild and crazy. To say that they “still have it” is a gross understatement. They killed this performance and it’s easy to see why the crowd went wild!

During their show last September 13 at Winnipeg, Manitoba, they played their 1988 classic hit “Blackened” in front of more than 17,000 fans. And they also donated $10,000 to Winnipeg Harvest – the city’s food bank. Through their foundation’s Twitter account All Within My Hand’s Foundation, they wrote:

“A big thank you to everyone attending #MetInWinnipeg for helping us raise money to support @WinnipegHarvest, a local organization dedicated to focusing attention on hunger within their community and moving toward long-term solutions. #MetallicaGivesBack #AWMH”

“Blackened” is the opening track in Metallica’s critically acclaimed record “…And Justice for All.” It’s a complicated tune since for the intro alone, they had to reverse the guitars and use numerous overdubs.

“We were in my one-bedroom apartment. I had my little four-track Tascam set up in the corner of the bedroom, and we were jamming on our guitars, just playing through some riffs. I played that “Blackened” riff, and he [James Hetfield] goes, “Dude, what is that?” Because it was really pretty crazy. The original thing is a very fast alternating thing. Man, it’s pretty tricky, actually. I mean, the one that ended up on the record is pretty tricky, too, but the original one is really tricky.” – Jason Newsted

Interestingly, one of their latest endeavors is the Blackened American Whiskey named after their classic track. This isn’t your average whiskey because the whole aging process includes the liquor being “housed in black brandy barrels and inundated with low hertz sound waves so intense that it actually enhances the molecular interaction and ultimately the finish of the whiskey.” Wow!