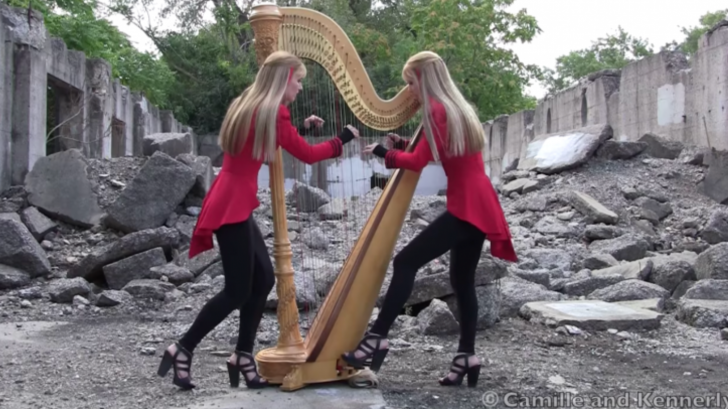 And You Thought You’d Seen Everything…

We’ve seen a variety of amazing covers in this industry. From 4-year-olds smashing the drums to senior citizens shredding the guitar. But what we haven’t seen are identical twins covering classic rock favorites on the harp! Gotta love the power of Youtube, bringing extraordinary talent like this viewers all around the world.

Twin harpists Camille and Kennerly have 500,000+ subscribers on Youtube with their own arrangements of rock hits from artists like Led Zeppelin, Ozzy Osbourne, AC/DC and more. You name it, they’ve done it. Not only have they done it. They’ve freaking killed it.

This video, with over 10 million hits, shows the Harp Twins killing their own rendition of Metallica’s Grammy award winning hit “One”, characteristically playing on one harp. Look at all the effort that goes into creating a magnificent video like this. We know they practice a few hours every day because really, it takes an insane amount of hard work and dedication to make a cover this magical.

“Our dream was to perform the music that we wanted to play in the way we wanted to play it. So we followed that dream. We have always had “performer personalities”, but we also found that we had a knack for arranging, producing and creating. We’re passionate about music, playing the harp, and out-of-the-box thinking. Our career is really being ourselves and taking the things we love and putting them all together.” – The Harp Twins

One thing that sets them apart from other artists is that they made use of an instrument that’s not exactly that popular with mainstream audience. Before them, nobody probably thought it would be a good idea to cover classic rock songs on a harp but look at them now, they nailed it perfectly.

Make sure to enjoy and share these young ladies’ talent!