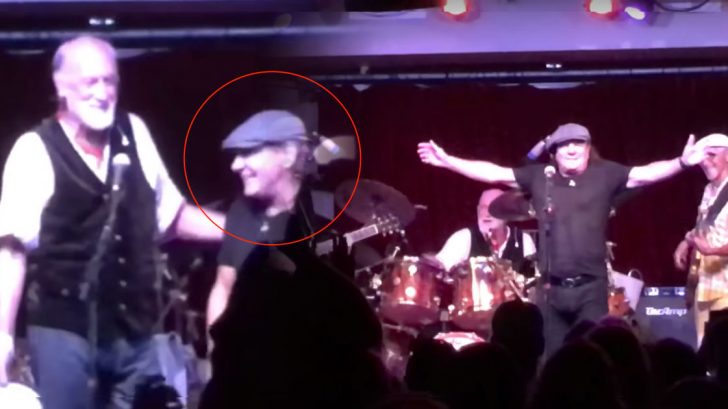 Ever since suffering from a hearing problem, former AC/DC singer Brian Johnson had been forced to leave the band. Surely he’s been privately recovering from his ailment, keeping a fairly low profile since leaving AC/DC. However, he makes particularly rare exceptions to his public appearances when he joined Mick Fleetwood onstage at his Hawaiian restaurant in Lahaina, much to the surprised delight of many fans.

The two rock stars belted out a cover of the classic “(Get Your Kicks on) Route 66” as per request of Mr. Johnson himself, and from the looks of the performance, it seems that the two are having a good time jamming it out. Johnson also joked in a little banter they had that he and Fleetwood were now “vintage”.
Fleetwood and his house band were performing for patrons at Fleetwood’s on Front Street earlier this month, when Johnson

Is Johnson finally returning to the band? This rare appearance and spontaneous performance may serve as proof that the singer is well on his way to a full recovery. He has expressed hope that maybe a new type of ear-monitor can help him out. In a recent interview, he has stated that it was his own decision to leave the band on his own terms before the time came when he couldn’t perform anymore due to his debilitating issue with his hearing.  He shares,

“Onstage it was getting harder and harder to hear the guitars, even hear the keys, and I was basically going on muscle memory…And I’m not the kind of guy who likes to cheat. The way I look at it, I had a great run.”

Hopefully his performance with Mick Fleetwood is helping him get back in the game.