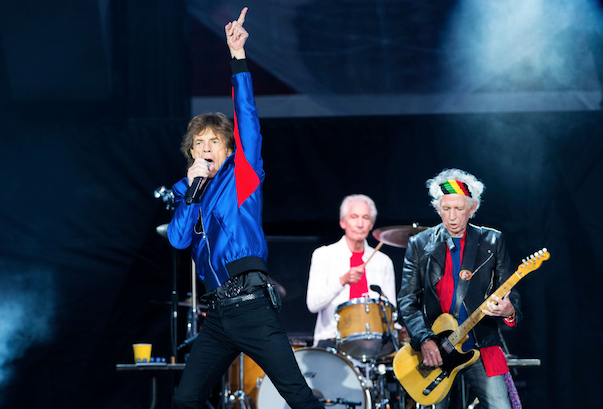 SOUTHAMPTON, ENGLAND - MAY 29: (L-R) Mick Jagger, Charlie Watts and Keith Richards of the Rolling Stones perform live on stage at St Mary's Stadium on May 29, 2018 in Southampton, England. (Photo by Matthew Baker/Getty Images)

What an adrenaline rushed year 2019 will be for the Jagger family. The birth of Mick Jagger’s son Devon, with ballerina girlfriend Melanie Hamrick, was a welcome addition in December 2016. The culture-driven couple make an outstanding duo, not just as parents. The living legend will be collaborating with Hamrick on a new ballet set to some of the Rolling Stone’s most famous jams.

Ballerina, Melanie Hamrick, just wrapped up her part in “The Nutcracker,” and has taken a leave of absence from the American Ballet Theatre during the holidays. She’ll be focusing on mommy duties and coordinating her first ballet with rock god boyfriend. The ballet will not be the only major event for Jagger this year.

The Rolling Stones will be starting their U.S. leg of their No Filter tour on April 20th in Miami, Florida. Before arriving in the states, Mick Jagger will most likely (we’ll keep you updated) be attending the premier of the ballet performance in  St. Petersburg, Russia. Afterward, he’ll be on his way to the U.S. debut in New York City, set for April 18 at the Youth America Grand Prix at Lincoln Center.

Songs expected to be included in the Hamrick/Jagger ballet will be The Rolling Stone’s: “You Can’t Always Get What You Want,” “Paint It Black,” and “She’s A Rainbow.” The front man will be very busy with shows this week! Just 2 days later on the 20th of April, he’ll be traveling south on the East coast to Miami, Florida to start the Rolling Stones Tour at the Hard Rock Stadium.

Here’s little Dev Jagger and ballerina mommy dancing on the sides of the Stone’s European No Filter leg in August (2018)!