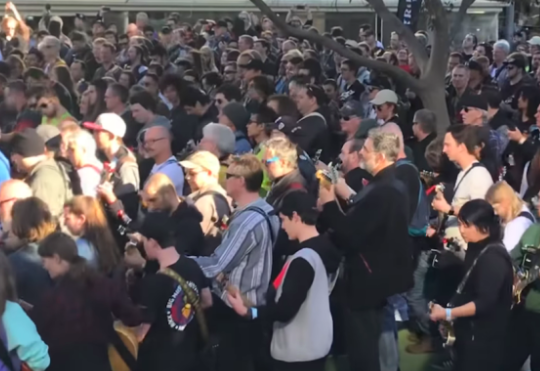 In the land of AC/DC’s origin, Sydney, Australia, hundreds upon hundreds of guitar players played one of the most popular riffs of all time, AC/DC’s classic “Highway To Hell,” together in an attempt to break a world record. 457 guitarists to be exact.

According to Reverb, 457 musicians got together at the Sydney Guitar Festival to beat the record of 368 Indian guitarists playing “Knockin ‘On Heavens Door” in 2013. It has not been officially declared a world record as of yet as Guinness may sometimes take up to six weeks to verify the results of a record-setting attempt.

The event was done in order to raise money for the benefit of The Australian Children’s Music Foundation, a charity that offers music lessons and instruments for disadvantaged children.

Watch the record-setting performance below: