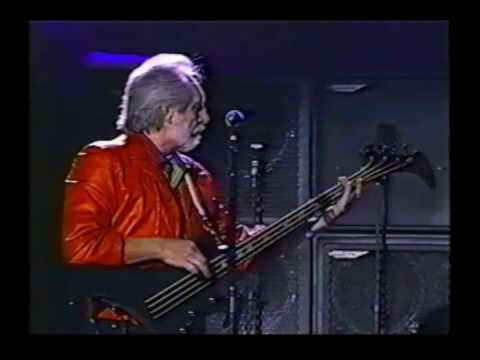 The Who’s silent weapon was none other than John Entwistle. Entwistle was always the mystery of the group, in contrast to his comrades Pete Townshend, Roger Daltrey, and particularly Keith Moon. They were known for their ferocity, arrogance, and unpredictable personalities.

Entwistle was the tallest member of the band, and he generally had a relaxed, unpretentious approach. But his bass playing was everything but; it was loud, powerful, quick-handed, and completely unique. He and Moon together created one of the most exciting rhythm sections in rock history.

Within the group, Entwistle was also somewhat of a polymath. Entwistle created a number of bass solos that rounded out some of The Who’s biggest songs, such as “My Generation” and “Who Are You,” despite the fact that he typically kept them in the background. Occasionally serving as the group’s alternate singer-songwriter, Entwistle wrote popular standards including “Boris the Spider,” “Heaven and Hell,” and “My Wife.” Entwistle even added dramatic arrangements to songs like “The Real Me” and “Sparks” by drawing on his background playing the French horn.

Entwistle didn’t speak up all that frequently, but when he did, his comrades were unable to stop him. When the band finished the final recording of “Substitute,” one of the group’s first commercially successful songs, Entwistle took the lead instead of the traditional guitar solo that was intended to arrive halfway through the song.

“I played a Gibson SG medium-scale bass with wire-wound strings,” Entwistle would remember. “When it got to the solo, because we were recording and mixing it virtually live, I thought, ‘Yeah, this should be a bass solo’, so I turned my volume up and they couldn’t mix me out, so it ended up as a bass solo.”

At a period when the bass was just starting to make its mark in the world of rock and roll, John Entwistle was maybe the first notable musician to approach the bass as a lead instrument. The bass was often put low in mixing methods from the 1960s, but Entwistle was just too loud, too obvious, and too brilliant to be buried beneath other instruments.