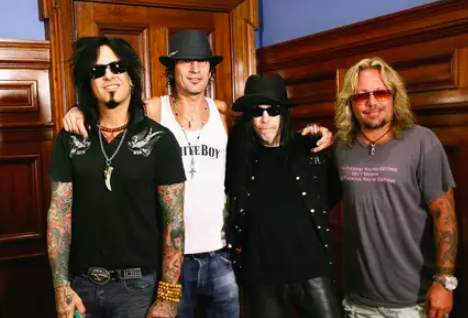 Mötley Crüe Singer Vince Neil recently shared an update on his social media teasing the band’s progress with recording a series of new original tunes to be included on the soundtrack to the upcoming biopic based off of their 2001 memoir “The Dirt: Confessions of the World’s Most Notorious Rock Band.”

The movie is a film version of said memoir and will also be called “The Dirt”. This film was originally slated for release in the summer of 2016. Directed by Jeff Tremaine, “The Dirt” will be released via Netflix and will star Machine Gun Kelly as Tommy Lee, Douglas Booth as Nikki Sixx, Daniel Webber as Vince Neil and Game of Thrones baddie Iwan Rheon as guitarist Mick Mars.

Fans are all giddy for this highly anticipated biopic and with the news of new music, the band is keeping everybody on the edge.

Nikki Sixx also took to Twitter in a Q&A session about the unreleased tracks, saying,

“I’m listening to the roughs of the new Motley Crue and it feels real and raw. Everybody is playing like mad and the songs crush.” says Sixx. He also adds that they have “a surprise that will confirm that we’re outta our minds.”

Neill tweeted the news that he was working with producer Bob Rock in Nashville last month:

Me and Bob Rock finished 2 songs today! Great recording with him again. pic.twitter.com/kD0n1TBVTu

Sixx later confirmed that a total of four songs would be included in the movie soundtrack, reassuring everyone,

“You can trust us these are ball busters. Everybody can relax.”

After an emotional farewell show at the Los Angeles Staples Center back in 2015, everybody thought Motley Crue would never come back together again and that show was the last we would see of them. The finality of the band was even cemented when they signed a high-profile contract, that would lead to them being sued if they ever hit the road together again. The contract, however, did not include anything about releasing new music and it seems like that is all they have been busy about these last couple of months.

“The Dirt” is still currently in production.