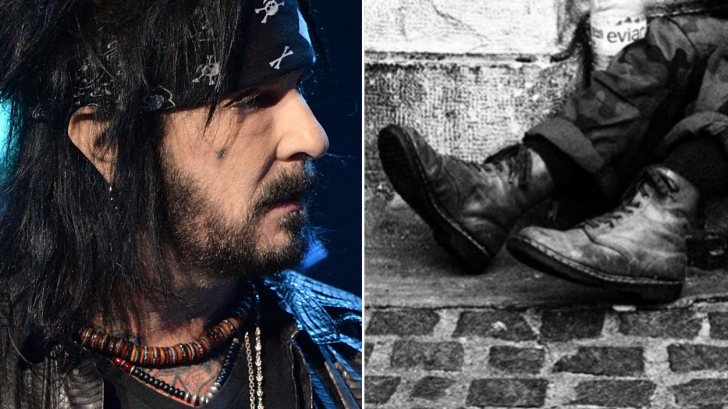 These days, he’s clean and sober but as many Mötley Crüe fans can remember, there was a time when excess and debauchery were the name of the game – a game that nearly claimed Nikki’s life on December 23, 1987. A heroin overdose left the Mötley Crüe bassist legally dead before he was able to be revived, leaving him with a brand new appreciation for life.

Thankfully, Nikki was able to kick his habit over time and at 60 years old is quite literally living his very best life, as evidenced by the killer photos he shares to social media. But until the day he dies, he’ll never forget that period in his life and what it taught him, and a photo he recently shared to Instagram serves as a powerful reminder of where he’s been, where he is, and where he’d rather die than return to.

The photo, snapped by Nikki during a trip to France, is of an older man shooting heroin on a small town street. He captioned it, “Took this in a small town in France. Broad daylight in a public square. Addiction is a global issue and comes in many forms. It breaks my heart every time I push the shutter.”

The photo spawned an intelligent, heartfelt debate in the comment section, with fans sharing their own experiences with addiction as either a survivor or a loved one to a survivor.

“You captured this man’s soul…his pain…his need to escape the monstrosity of society.”

“Awareness is the only way to help with this illness.”

We’re infinitely proud that Nikki was able to escape addiction’s clutches and go on to live a beautiful, full life – a life that he was nearly robbed of more than 30 years ago. Check out this awesome interview where he gives some great advice for struggling addicts.