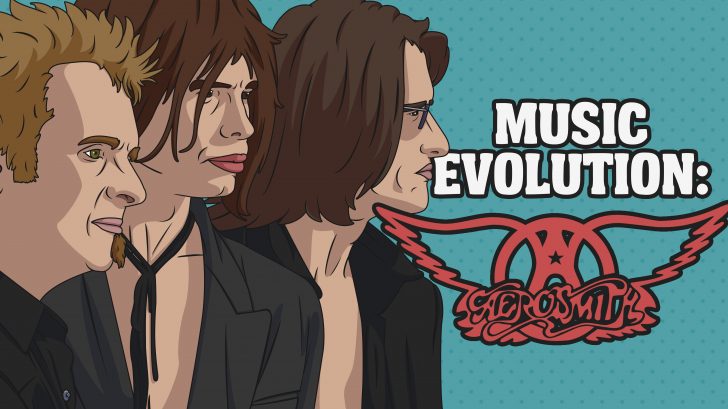 Aerosmith has had a pretty interesting run – they broke into mainstream, churned out songs that dominated the radio, then they started going downhill and suddenly boom, they found a way to resurrect their dying career. And over four decades after their formation, they’re still showing everyone that no one can hold a candle to them.

Sure, they may have chosen different paths and we’re not even sure if we’re getting any farewell tour anytime soon but they’re proof that genuine talent will take you places. Now let’s take a look back at their music evolution and how they made their mark in rock. They set the bar high with their distinctive sound and style and of course, Steven Tyler’s showmanship. They can go from heavy to hard rock to ballad and deliver the goods every single time. But more than that, they gave us tunes that even today’s kids are still singing.

In this era, Aerosmith experienced their surge in popularity. When they released their self-titled debut album in 1973, it didn’t crack the Top 20 and the first single “Dream On” was only a minor hit.

It was with their third record “Toys in the Attic” that propelled them into international stardom. “Walk this Way” and “Sweet Emotion” became instant classics and there were no fillers. At this point, they already found their sound and it became apparent that their hard rock-meets-blues music was working.

“Rocks” replicated the previous album’s success and it charted quickly. And although “Draw the Line” didn’t sell as much, it’s still considered a decent record for all that.

Towards the end of the decade, however, their substance abuse was taking a toll on them. And in 1979, Joe Perry left and started doing his own projects.

In 1980, Steven Tyler hit rock bottom mostly because he’s been living a life of excesses and it was catching up with him. It was already affecting his performances on stage and in the studio. He once collapsed in the middle of a show and also suffered injuries from a motorcycle accident. They released “Rock in a Hard Place” sans Joe Perry and Brad Whitford and while it was edgy, it lacked the usual oomph the band had with Perry and Whitford.

After reuniting, there wasn’t much interest in their new material since “Done with Mirrors” was a commercial failure. To be fair, it received some good reviews and the record itself was far from mediocre especially with their guitar-hero antics. Tyler’s vocal performance was excellent but for a band who already enjoyed massive success, this was a bit of a let-down.

Already fully aware that drugs were pulling them down, Tyler, Perry and the rest of the boys underwent and completed rehabilitation programs. And things became more interesting when the Toxic Twins collaborated with hiphop group Run-DMC. It was an unlikely collaboration and in theory, it would have been a disaster. Surprisingly, it worked. Run-DMC finally crossed over to mainstream pop and for Aerosmith, it was a huge step for them to reclaim their throne.

In 1987, “Permanent Vacation” became a pivotal moment in their career because it was a huge hit mostly because they decided to hire songwriters like Desmond Child and they were all sober during recording. There may have been fillers but overall, it was a stellar record as evidenced by the timeless tracks “Angel,” “Rag Doll” and “Dude (Looks Like a Lady).”

And this was the ’80s so of course, they jumped on the ‘cheesy tunes’ bandwagon. Nevertheless, they still sounded badass even with their power ballads.

Their reinvention didn’t end there because their next album “Pump” made use of horn sections and keyboards. And they also tackled serious controversial issues like murder and incest. But even so, they never lost focus of who they were as a group which added grit to the record. At the core, they were still very much hard rockers. Besides, it gave them their first Grammy Award.

Before going back to Columbia Records, Aerosmith released “Get A Grip” under Geffen which was still successful. It had the raunchy tunes we’ve come to love but they also had power ballads which appealed to the mainstream audience. All things considered, it didn’t have the magic their other records had.

Their first album back with Columbia Records, “Nine Lives” was the product of bad luck and bad decisions. It was so messy that the band almost broke up. And the result? A less-than-appealing record that almost sounded like an Aerosmith cover band.

But the ’90s wasn’t totally unkind to the band because in 1998, they released the single “I Don’t Want To Miss A Thing” which debuted at #1 on the US Billboard Hot 100. It may be a staple song in weddings or any similar events but some fans felt like they were selling out.

They kicked off the decade with a performance during the Super Bowl XXXV halftime show. On the same year, they released “Just Push Play” which immediately rose to the top of the charts because of the hit single “Jaded.” However, it may have been commercially successful but it received mixed reviews with Joe Perry revealing it was his least favorite album. It sounds tight and classic but doesn’t come close to their best records.

In 2004, they went back to their blues rock roots with “Hokin’ on Bobo.” And they sounded like they were really enjoying it. It’s slick and even though it pales in comparison to their other hits, it’s still much better than their other half-assed records.

The band members have been pursuing side projects with Steven Tyler releasing a country album and Joe Perry joining Hollywood Vampires. As of today, it’s unclear whether we’ll get a reunion or not but one thing’s for sure, Aerosmith deserved their spot in the rock ‘n roll pantheon.