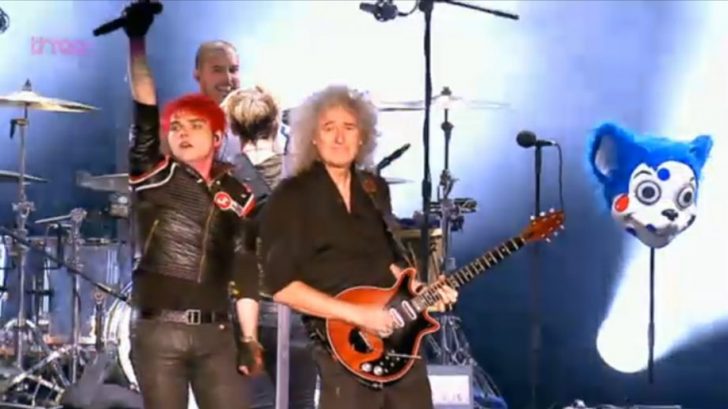 May Found a Way

Brian May is now in with the emo-punk-rock crowd. The legendary Queen guitarist at the 2011 Reading Festival in England and performed with My Chemical Romance or MCR. The crowd went absolutely wild when Brian May came out to jam along to MCR’s rendition of his band’s original iconic song “We Will Rock You”. Then, he also played along to MCR’s hit “Welcome to the Black Parade.”

So how did this unlikely collab happen? My Chemical Romance frontman Gerard Way explains in an interview with NME,

“I wrote an email to Brian after getting his email off (producer) Rob Cavallo. There was this story that (Queen) played a show in Paris and got booed off and Freddie (Mercury) said, ‘We’re gonna come back and be the biggest band in the world’. And after what happened to us at Reading in 2006 (when they were bottled), people would ask us, ‘Are you gonna do that again?’ and I’d go, ‘Not unless we’re headlining it.'”

And what a come back they both had at the Reading Festival that year.

This world hasn't appreciated this man enough. He's such a brave, clever, caring and talented man. If you'd say 'Brian May' in my country maybe 1 out of 1000 people would know who he is. And that's so sad. He deserves recognition, he deserves to be put in books for the students to learn about him! Stolen from @robgolton #brianmay #brianharoldmay #redspecial

Brian May wrote about his experience of collaborating with My Chemical Romance on his website. May says of the band,

“…This band, in my opinion, is very talented. And they have the courage of their convictions. They have had, like us in the early days, more than their fair share of negativity hurled at them … but that goes with the territory … the territory of revealing yourself in your art. Gerard as a front man is magnificent, of course – his honesty and vulnerability – along with the right kind of instinct for being a hero – connects instantly with the audience, reminding me quite a bit of a certain other great front man I worked with for many years…”

Watch their epic stage collaboration in the view below: