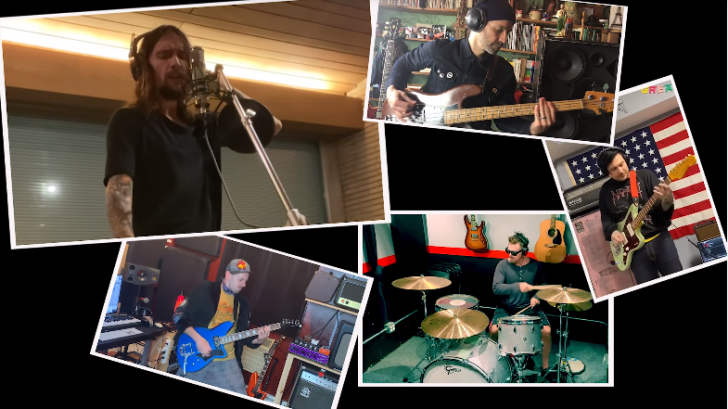 A group of musicians recorded a cover of the Ramones’ “I Believe in Miracles” to raise funds for charity. A GoFundMe page has been launched in support of Partners in Health, who focuses on treating infectious diseases such as the COVID-19 around the globe.

The group labeled themselves as, Rock for Hope, which consists of Frank Iero of My Chemical Romance, Justin Hawkins of The Darkness, Walter Schreifels of Quicksand, Gorilla Biscuits, Youth of Today, Rival Schools, CIV, Frank Turner, Boris Pelekh of Gogol Bordello, Hey Guy, Eugene Hutz of Gogol Bordello, Brett Anderson of The Donnas, Tom Higgenson of Plain White T’s, Nathen Maxwell of Flogging Molly, The Bunny Gang, Mike Miley of Rival Sons, and Roy Cardenas of Mutemath have joined forces for their own rendition of Ramones, “I Believe in Miracles” which was released on the group’s 1989 album, Brain Drain.

Boris Pelekh had the idea to organize the project from his mother, who works as a staff nurse at New York-Presbyterian/Queens hospital.

“It was roughly around late March 2020 when her hospital became a central hotspot of the pandemic in NYC, and her unit was repurposed for COVID-19 patients,” Pelekh explains.

“The situation was growing more and more grim by the day, as I would get reports from her every night. It became very tough for me to simply isolate at home and not try and help somehow. Since I play guitar in a very influential punk-rock band; Gogol Bordello, I decided to grab a bunch of friends from other beloved rock and punk bands to come together virtually, and make a multimedia version of a hopeful and anthemic punk-rock song. I wanted to raise people’s spirits and help fund a charitable organization dealing with COVID-19.

“My mom always complained about the lack of PPE in her hospital, so I went out searching for a charitable organization that specifically funded PPE and other medical equipment for healthcare workers. I found the highly reputable Partners In Health who were very closely aligned with my objective and were working on an international level.

“I picked one of the most timeless punk bands from Queens; Ramones. Their song ‘I Believe in Miracles’ could not be a better fit. Partners In Health loved the idea and we quickly affiliated to get this video to be a fundraiser for PPE and other medical equipment across the world. With all set in place, the individual band members sent me their parts, and I threw together this multimedia collaboration of Ramones’ ‘I Believe in Miracles.’

“#rockforhopeproject’s motto is simple, ‘If you’re not in the position to give, share this video with someone that is.’”

The group’s goal via GoFundMe is to raise $20,000 for Partners in Health. All donations are 100 percent tax-deductible.