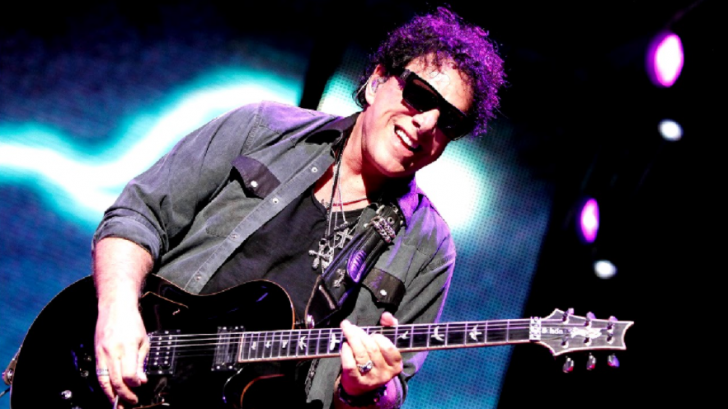 During an interview on The Eddie Trunk Podcast, Journey guitarist Neal Schon discussed Van Halen, reminiscing how Journey got Eddie Van Halen and co. on one of their initial major tours.

When asked, “Van Halen, if I’m not mistaken, one of their very first tours was opening for Journey, right?”, Schon replied (transcribed by UG):

“Actually, we took Van Halen on their first tour. Funny story, man, I’m gonna lay it out here, I didn’t think about this; it was in ’78, their record [1978’s self-titled debut] should’ve been released a couple of months.

“Three months prior to the tour starting, I had received a little red EP, the promotional EP that had ‘Eruption‘ on it and ‘You Really Got Me.’

“And so I proceeded to put it on my turntable in my bedroom with a guitar and amp, and I’m sitting there listening to ‘Eruption’ and I’m going, ‘What the fuck is this guy doing?’ I could not figure it out.

“I’ve been listening to Mahavishnu [Orchestra], all kinds of people, you know, and breaking things down I could just not figure out what he was doing with the hand movements.

“And it drove me nuts. And we finally got out there and got to know Ed and watched him just kill it, and I was very happy not to be following him – they had Ronnie Montrose [as the second opening act on the Journey headlining tour]. Montrose was in the middle; so Van Halen, and then Montrose, and then Journey.”

You sent me that ad, it’s really funny seeing so small ‘special guest Van Halen,’ then Montrose, then you guys. Of course, Ronnie was great in his own right, but I imagine it was not easy for him to follow Van Halen, especially at that time.

“No; he did well, though. I mean, the band was strong. Eddie was just so on fire and doing new things that nobody had seen before, like, ‘What is going on?’

“It was great, and we had a lot of fun on that tour, hung out a lot, watched him trash a lot of hotel rooms. [Laughs] I think they were wanting to be The Who, you know?

“Eddie had told me one of his biggest records that inspired him even to come up with the concept of Van Halen was The Who’s [1970 live record] ‘Live at Leeds.'”

Do you remember what the audience reaction was like to Van Halen then?

“Absolutely. I got there early just to watch, to have Eddie come over and point the guitar at me like a bow and arrow, like, ‘Here it comes, man!’

“It was electrifying, and the audience definitely got it. I think they were wowed, you know, it just blew everybody away.”

How long did they stay out with you? Was that like a short tour?

“Well, we stayed out, our ‘Infinity Tour’ was named ‘Infinity Tour’ because it lasted forever – I believe we did 180 shows. What I recall Van Halen maybe had done three months with us, maybe a little less than that.”

They ended up going out with Sabbath, and I don’t know if that was before or after you guys…

“It was after us. We were the first tour that they went on, and then we hooked up later, playing a lot of the summer festivals together, the Texxas Jam and all over the place – it was a great time, a great period in my life, seeing all of them.

“I was so sad to hear the news the other day, I was really hit hard like a lot of people, but I realized that Ed and were very close in the ’80s and hung out a lot, not just on tour, but when he would come into town we’d hang out, just talking music in a room, playing music for each other, checking things out.

“One of the things that are very funny is – I completed the record with Sammy, the HSAS record [Hagar Schon Aaronson Shrieve was a supergroup active in 1983 and ’84, releasing its sole album ‘Through the Fire’ in 1984], and we were playing each other’s music one night after they played in San Francisco at the Cow Palace.

“And they wanted me to give them a ride to the hotel, so he grabbed a bottle of vodka, jumped in my Porsche, and he proceeded to chug it while I’m driving down the freeway. I’m like, ‘Dude, hold that thing down, keep it down.’

“Anyway, we got to the hotel, and we had a cassette machine, and he was playing me some stuff, and I slapped the HSAS cassette, and he kept going over to the machine and stopping it backward, forwards, going over this one guitar riff…

“And so that’s when he found out about Sammy – me playing him that night. I mean, he knew who Sammy was through Montrose, through that first record, but he didn’t know anything beyond that.”

[Producer] Ted Templeman had said in his own book recently that they actually entertained the idea back in ’78 when he did that first record, that he actually toyed with the idea then of having Sammy come in from day one because Dave [Lee Roth] was struggling vocally…

“I didn’t know that, that’s a nice bit of information there. You know, the stars aligned for him later on, but I do have to admit, I love both versions.

“I was a fan of the original band, as well as with Sammy, but the original one had a circus vibe to it, you know, and Eddie was just – he was the brains and the catalyst of everything that was going on there.

“They got into more song-oriented songs, and with Sammy ended up selling more records, but I did love the initial punk attitude on the earlier records.”

From having seen them so early like that, did you think when they left that tour that they were going to go on to what they went on to – did you feel like that’s gonna become a huge band?

“You know, honest to god, I’m a guitar player and I followed all the guitar greats throughout my whole career, and when I saw Ed and how fresh it was, I’d go, ‘These guys are gonna be massive.’

“Because at that point in my career, I really felt like everything revolved around the guitar, and it still does to a certain point, to me. I mean, I love both vocalists and I love different types of songwriting, but the rock ‘n’ roll, man, it is guitar and drums.

“We had a great connection with Alex [Van Halen, drums] and Michael [Anthony, bass], they were very, very solid, and I loved playing with Michael years after that with Sammy and I realized what a great bass player he was actually.

“He had a high voice that really gave them a lot of character. Where Dave may have lacked in his range, Michael brought that energy to it, which made it very characteristic of what I consider Van Halen’s overall sound – but I did think they were gonna be massive.”

When you saw Ed and get to know him, did you have conversations – did you say like, ‘Hey man, what are you doing there?’

“Absolutely. He would hide it a lot in the beginning; he would, like, turn his back a lot of times to the audience or hold the guitar in a certain way where you couldn’t see exactly what he was doing.

“So halfway through, I remember being in his dressing room, or he came to my dressing room and I said, ‘Show me what it is, man’, and he did it, and I did it pretty immediately, but I was just like, ‘Son of a bitch, that’s so crazy! I never would’ve thought of that…’

“So Ed took it to a whole another, he just set the bar so high. But also, he’s such an innovator in the sense of being able to know what sounds he needed to use.

“The fact that he needed to be in E-flat was a big thing because it’s not so easy to do in E; you can still do it when the guitar’s tuned up, but when it’s E flat, the strings become easier to get a lot more speed off it of your index finger of your right hand.

“So, a little trick of the trade of what he developed into his own style’ and also the power alternator that he used on the old Marshall head that actually soaked the power down in the head that made it easier to dig in, it gave it a bit more.

“The tubes would heat up and everything would compress a bit more – it’s like a built-in natural amp distortion that gave it that beautiful brown sound.”

Did you guys had the opportunity to jam much?

“We did a couple of times, of course, like backstage. He was just writing [1979’s] ‘Dance the Night Away,’ and he was just showing me the chords to that and how he was tapping on the chords, and he was like, ‘Check this out. I think this is really melodic, I think that it’s going to be a song.’

“We would jam every once in a while backstage, but more so we did, like, there was a club here in Bay Area called Uncle Charlie’s, and I stuck some pictures up last week that people and friends were sending me that I didn’t even have.

“They were of him and I jamming in that club when we were hanging out; he said, ‘Hey, do you want to go jam with Eric Martin,’ who was in the Bay Area. And we went, we got in, and then the club closed and then we jammed some more.”