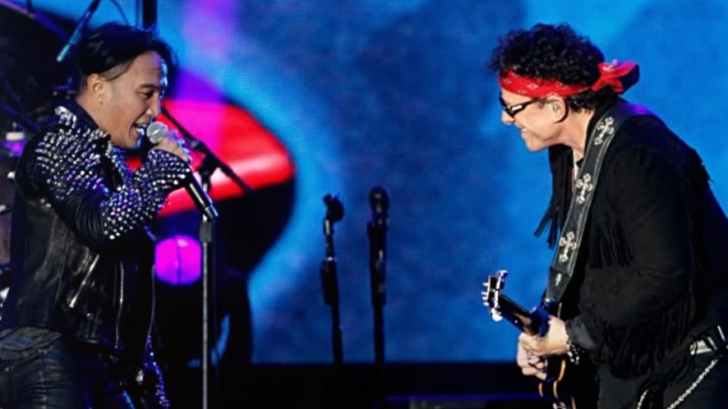 Neal Schon, the guitarist for JOURNEY, was questioned about what it’s been like to collaborate with singer Arnel Pineda for the past 15 years in a recent interview with Brazilian writer Igor Miranda.

“Arnel is just a gem. He’s more amazing right now than he was when I first found him in Manila 15 years ago, when he was homeless and he was in dire straits. I was searching for the new singer for JOURNEY and I chose YouTube to look all over the world for the singer. When I heard his voice, I knew that he was it — with no other thought. It hit me emotionally in my heart. I went, ‘That is the voice. He is the voice. I know he can do it.’ And so I stuck to my guns, with a lot of resistance from many — from within the band and from management. They all thought I was crazy. I said, ‘I know I’m right. So get him over here.’ We got him over. And he proved that I was right again.”

“The show we just played the other night, he sounded phenomenal through the whole show. We finally got his in-ears sorted out; we’ve got a great mixer in front now. It sounds like a record every night. And he’s sounding phenomenal every night. And he’s very excited about some of the new direction that we took that allows him to show how creative he can be without having to emulate our other albums, which is a requirement for any singer that would come into JOURNEY. It’s either that or you throw away all your hits that you ever had. And what do you do? Start from ground zero again? It doesn’t make sense.

“So I knew when I found Arnel that I had found a true chameleon like no other singer I’ve ever heard. He is amazing. I love him. He’s a true warrior.”

Pineda, a native of the Philippines, has been guiding the famed rockers since Schon first saw him playing in a Manila cover band on YouTube in 2007. Arnel, a vocal clone of JOURNEY’s former frontman Steve Perry, has assisted in getting the band back into arenas. However, some fans were not pleased with Pineda’s arrival, criticizing his ethnicity and characterizing his vocals as a “copycat” of Perry’s.

When JOURNEY and its former vocalist took the stage together at their Rock & Roll Hall of Fame induction in April 2017, Pineda and Perry finally met. Steve praised both the person who took his place and his former bandmates in his acceptance speech. ” “I must give a shout-out to a man who sings his heart out every night, Arnel Pineda.”