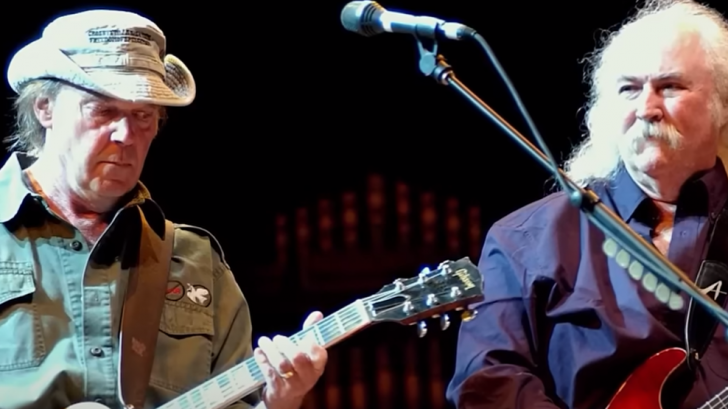 When David Crosby passed away last week, Neil Young and his old bandmate were long-time enemies. He has instead chosen to concentrate on the renowned songs they wrote together while they were members of Crosby, Stills, Nash & Young. Neil Young remarked on his official website, Neil Young Archives, “David is gone, but his music lives on.

“The soul of CSNY, David’s voice and energy were at the heart of our band. His great songs stood for what we believed in and it was always fun and exciting when we got to play together.”

The two stopped talking in 2014 when Crosby disparaged Young’s then-new girlfriend, Daryl Hannah, after Young split from his wife Pegi, labeling Hannah a “pure poisonous predator.” Although they commemorated a landmark tour together with the release of CSNY 1974, their final studio effort was 1999’s Looking Forward. It was just the third album by CSNY, following American Dream from 1988 and Deja Vu from 1970.

“We had so many great times, especially in the early years. Crosby was a very supportive friend in my early life, as we bit off big pieces of our experience together. David was the catalyst of many things,” Young revealed. “‘Almost Cut My Hair’ and ‘Deja Vu,’ and so many other great songs he wrote were wonderful to jam on, and [Stephen] Stills and I had a blast as he kept going on and on. His singing with Graham [Nash] was memorable, their duo spot a highlight of so many of our shows.”

Young, who eventually wed Hannah, received several apology letters from Crosby. Young lately appeared to be gravitating toward the concept of a reunion, telling Mojo in 2017:

“Crosby, Stills, Nash, & Young had every chance of getting together again. I’m not against it. There’s been a lot of bad things happen among us, and a lot of things have to be settled. But that’s what brothers and families are all about. We’ll see what happens. I’m open. I don’t think I’m a major obstacle.”

Crosby, Stills, and Nash followed Young in pulling their tracks off Spotify in 2022 amid a COVID-19-related scandal involving podcaster Joe Rogan, but the reunion never took place.