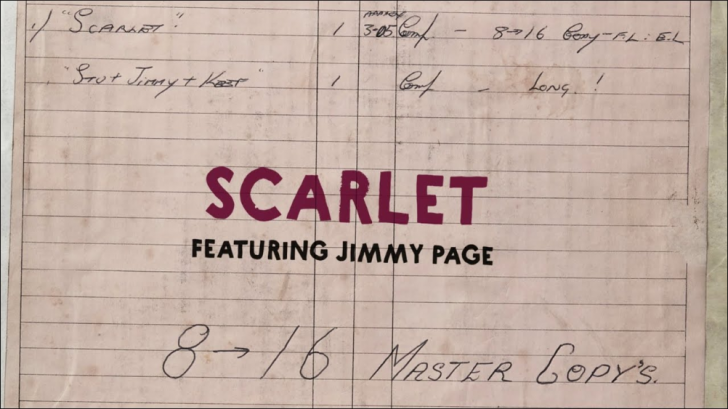 When this strange summer passes, we will have a new album by the Rolling Stones. It will be a reissue worthy of the biggest fans of the band from Goats Head Soup, an album that was originally published in 1973. The album was a resounding success, driven in large part by the ballad Angie, undoubtedly the biggest commercial success of the band to date.

After the Stones recently gave us Criss Cross, one of the unpublished songs that this new album will contain, the Stones have released another more of the songs that we can find. This is Scarlet, who curiously does not belong to the recording sessions of Goats Head Soup, but was recorded almost two years after the album’s release.

A recording, in addition, that has nothing of habitual. It emerged from a meeting between Mick Jagger’s group and Jimmy Page in Rotterdam in 1975. The Stones were immersed in the process of recording a new album, the first with Ron Wood as a pianist. Thus, one day the member of Led Zeppelin, a great friend of Keith Richards, appeared in the sessions. From one of these fortuitous collaborations, this musical relationship and this joint theme were born: Scarlet.

Scarlet is the name of the daughter of Jimmy Page and the French model Charlotte Martin in 1971, Scarlet Page, who today works as a photographer.

“We stayed up all night. It was a great day. I put the solos on the song when it was already eight in the morning,” Page said of Scarlet’s recording.

On September 4, the Rolling Stones will reissue Goats Head Soup this time, with a new mix of the album in stereo even using the files and sources from the original sessions. In addition, all formats will include three previously unreleased tracks: Criss Cross, Scarlet, and All The Rage, as well as alternative versions and demos.

This is the third unreleased track the Stones release after surprising us with Living In A Ghost Town, a track that gained a very convenient second reading during the confinement to which we were all forced during this pandemic. It was the band’s first original song in eight years, from Doom and Gloom and One More Shot, which appeared on their greatest hits album GRRR! (2012). Then we discovered Criss Cross, a review of a song recorded in November 1972, which never saw the light of day and was only included in a compilation of demos.

You can listen to the song below: