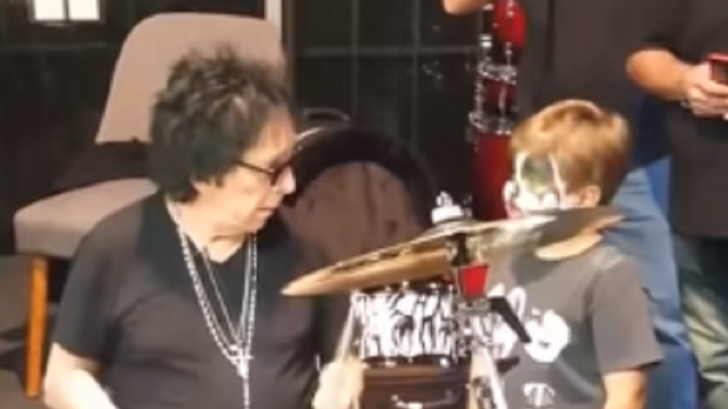 First off, we love seeing him back on the spotlight again! So yeah, he may not be joining KISS’ farewell tour any time soon but we won’t complain if we see small appearances like this. Even at 72 years old, he still looks like a badass rocker! Besides, we’re pretty sure a lot of KISS fans became drummers because of him.

And so last November 10 during the “DW Day” at Bentley’s Drum Shop in Fresno, California, Criss gave a quick tutorial to a young fan about techniques when you’re behind the kit. The kid wore a KISS tshirt and even had “Catman” makeup on! This is how you ensure the next generations falls in love with rock ‘n roll too.

“What I was doing maybe sounded a bit older. I wanted my solo album to be me. I did my best to get my voice to tackle every aspect of music, from soul to ballads. I loved the simplicity of the drumming on ‘Don’t You Let Me Down.’” – Peter Criss

How has everyone's day been?

He’s always been passionate about his craft which is why we think he deserves to be in the KISS lineup for next year’s tour. Still, however, we won’t mind if he released another album or hit the road again. A lot of his fans are just waiting for him to embark on a solo tour – he obviously still has it!

“I’d emulate Keith Moon, and I was into Gene Krupa and all the jazz drummers. But the singing was always very important. To me Ringo was the king for playing that way—and Charlie Watts and Hal Blaine. They knew how to not get in the way of the singer and the songs. To me, they were perfect drummers.” – Peter Criss

Since the rest of the KISS members didn’t exactly close their doors, we’re hoping Peter Criss would be featured in at least one show.