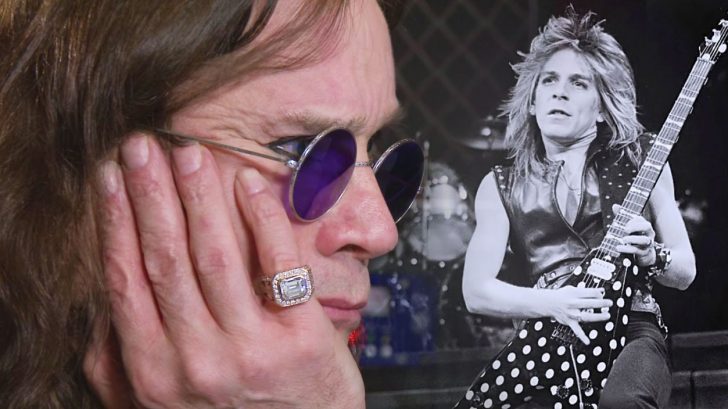 Randy Rhoads Still Surprises Ozzy After All These Years

When Randy Rhoads was tragically killed in a plane crash in 1982, the void he left in the music world was surpassed only by the void he left within his good friend Ozzy Osbourne. In fact, it’s pretty safe to say that Ozzy’s been haunted by the ghost of his fallen friend ever since, wondering what would have become of Randy’s already phenomenal talent had he lived another 5, 10, 25 years.

In this must-see video, Ozzy gets the surprise of a lifetime when for the first time in 30 years he hears the unreleased recording of Randy Rhoads performing a blistering guitar solo! It was never used in anything Ozzy’s ever done; in fact, Ozzy had never even heard it, much less known of its existence until this moment!

Visibly shaken and more than a little amazed as he listens to the lost track and talks about his relationship with Randy, Ozzy’s trip down memory lane is a bittersweet one, giving fans and his own son an emotionally charged glimpse into parts of himself that no one is allowed to see. It’s clear that for Ozzy, his time with Randy was precious and the memories attached to their recording sessions are some of the fondest of his career – and we wouldn’t have it any other way.

What an awesome surprise – I can only imagine the sheer comfort that hearing this hello in the form of Randy’s “lost” recording brought Ozzy after all these years!