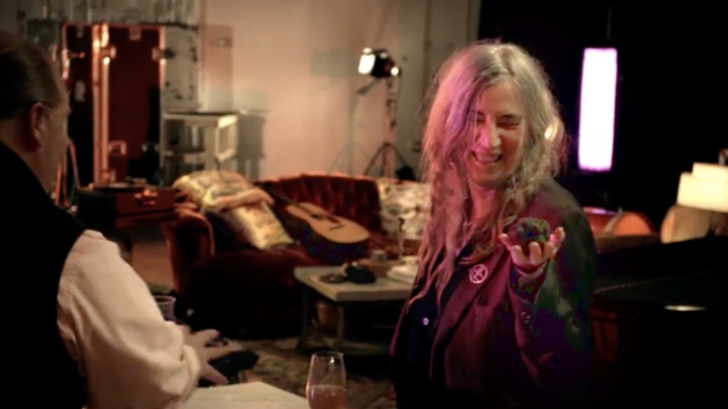 Patti Smith made her introduction to the rock world during the birth of punk rock in 1975, with her debut album Horses. Smith’s perspective on life has peaked the curiosity of her fans for decades. In 2015, she joined artful forces in the chef’s realm. Smith exchanged perspectives on food, music, and everything else- during an episode of Feedback Kitchen.

The show hosts rock musicians, as a platform to cook up dishes and have candid conversations about the comparisons of music and cuisine. Smith graced the episode with two beautiful gifts- a song that came to her by Jerry Garcia and her obsession with black truffles!

“Grateful” was released back in 2000 but never performed as intimately as her acoustic version on Feedback Kitchen. She says the song’s inspiration comes from Jerry Garcia- who came to her in a vision with a silver beard. Though the song is not about him, it is named after the inspirer. Goes to show, a natural songwriter can write under any circumstance.

Now, let’s get in the kitchen! The dish that chef Mario Batali plans to cook for Patti Smith is Linguine with Anchovies, Braised Kale, Sweet Garlic, and Black Truffles.

The Infinite Romance Between Food and Rock and Roll

Patti Smith loves black truffles! She calls them “black diamonds.” The rock songwriter says “they have the most exquisite odor, I prefer them to any perfume.” Batali grates black truffles GENEROUSLY over her linguini and anchovies to which Smith responds, “Oh, that’s against the law!” The chef responds, “That is the law!”

Batali says, “Some of my favorite songs don’t seem to be very complicated,” in reference to how simple and delicious the linguine plate turned out. To which Patti Smith so eloquently responds,

“All of the components, all of the ingredients, are for one thing- to come together in a perfect way, where you don’t question it. You just eat it. You just listen to it.”

And that’s her best approach to life. Sounds cliche, but just keep it simple and true!

The entire conversation between the chef and Patti Smith is a candid exchange of rich art. Whether it be food or music- these fundamentals have always brought out the humanity in us all. Sitting over a kitchen table, listening to music, eating a thoughtful meal, are among the most rooted systems of communication.

Watch the entire episode from Daily Motion below: